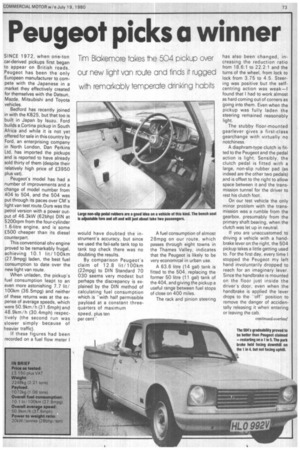 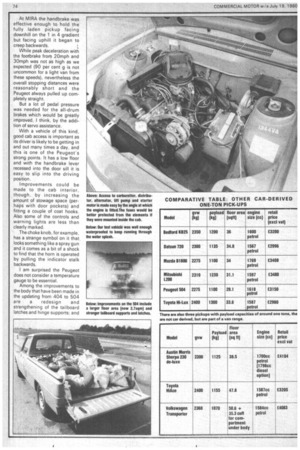 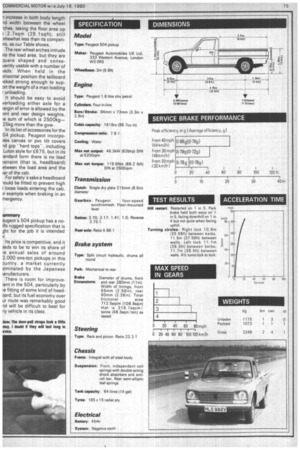 SINCE 1972, when one-ton car-derived pickups first began to appear on British roads, Peugeot has been the only European manufacturer to com pete with the Japanese in a market they effectively created for themselves with the Datsun, Mazda, Mitsubishi and Toyota vehicles.

Bedford has recently joined in with the KB25, but that too is built in Japan by lsuzu. Ford builds a Cortina pickup in South Africa and while it is not yet offered for sale in this country by Ford, an enterprising company in North London, Dan Perkins Ltd, has imported the pickups and is reported to have already sold thirty of them (despite their relatively high price of £3950 plus vat).

Peugeot's model has had a number of improvements and a change of model number from 404 to 504, and the 504 was put through its paces over CM 's light van test route.Ours was the petrol version with a power output of 46.3kW (62bhp) DIN at 5200rpm from the four-cylinder 1.6-litre engine, and is some £500 cheaper than its diesel counterpart.

When unladen, the pickup's fuel consumption leapt to an even more astonishing 7.7 lit/ 100km (36.5mpg) and neither of these returns was at the expense of average speeds, which were 50.9km ih (31.6mph) and 48.9km /h (30.4mph) respectively (the second run was slower simply because of heavier traffic).

If these figures had been recorded on a fuel flow meter 1 would have doubted the instrument's accuracy, but since we used the fail-safe tank top to tank top check there was no doubting the results.

By comparison Peugeot's claim of 12.8 lit/ 100km (22mpg) to DIN Standard 70 030 seems very modest but perhaps the discrepancy is explained by the DIN method of calculating fuel consumption which is "with half permissible payload at a constant threequarters of maximum speed, plus ten per cent' A fuel consumption of almost 28mpg on our route, which passes through eight towns in the Thames Valley, indicates that the Peugeot is likely to be very economical in urban use.

The rack and pinion steering has also been changed, increasing the reduction ratio from 18.6:1 to 22.2:1 and the turns of the wheel, from lock to lock from 3.75 to 4.5. Steering was positive but the selfcentring action was weak—I found that I had to work almost as hard coming out of corners as going into them. Even when the pickup was fully laden the steering remained reasonably light.

The stubby floor-mounted gearlever gives a first-class gearchange with virtually no notchiness.

A diaphram-type clutch is fitted to the Peugeot and the pedal action is light. Sensibly, the clutch pedal is fitted with a large, non-slip rubber pad (as indeed are the other two pedals) and is offset to the right to allow space between it and the transmission tunnel for the driver to rest his clutch foot.

On our test vehicle the only minor problem with the transmission was a rumble from the gearbox, presumably from the primary shaft bearing, when the clutch was let up in neutral.

If you are unaccustomed to

driving a vehicle with a handbrake lever on the right, the 504 pickup takes a little getting used to. For the first day, every time I stopped the Peugeot my left hand involuntarily dropped to reach for an imaginary lever. Since the handbrake is mounted on the floor just inside the driver's door, even when the handbrake is applied the lever drops to the "offposition to remove the danger of accidentally releasing it when entering or leaving the cab.

At MIRA the handbrake was effective enough to hold the fully laden pickup facing downhill on the 1 in 4 gradient but facing uphill it began to creep backwards.

While peak deceleration with the footbrake from 20mph and 30mph was not as high as we expected (90 per cent g is not uncommon for a light van from these speeds), nevertheless the overall stopping distances were reasonably short and the Peugeot always pulled up completely straight.

But a lot of pedal pressure was needed for the all-drum brakes which would be greatly improved, I think, by the addition of servo assistance.

With a vehicle of this kind, good cab access is important as its driver is likely to be getting in and out many times a day, and this is one of the Peugeot's strong points. It has a low floor and with the handbrake lever recessed into the door sill it is easy to slip into the driving position.

Improvements could be made to the cab interior, though, by increasing the amount of stowage space (perhaps with door pockets) and fitting a couple of coat hooks. Also some of the controls and warning lights are less than clearly marked.

The choke knob, for example, has a strange symbol on it that looks something like a spray gun and it comes as a bit of a shock to find that the horn is operated by pulling the indicator stalk backwards.

I am surprised the Peugeot does not consider a temperature gauge to be essential.

Among the improvements to the body that have been made in the updating from 404 to 504 are a redesign and strengthening of the tailboard latches and hinge supports; and 1 increase in both body length ld width between the wheel 'ches, taking the floor area up 2.7sqm (29.1sqft), still ynewhat less than its competiirs, as our Table shows.

The rear wheel arches intrude Ito the load area, but they are quare shaped and conseuently usable with a number of >ads. When held in the Drizontal position the tailboard ioked strong enough to supDrt the weight of a man loading r unloading.

It should be easy to avoid verloading either axle for a iargin of error is allowed by the ont and rear design weights, le sum of which is 2500kg25kg more than the gvw.

In its list of accessories for the 04 pickup, Peugeot incorpoites canvas or pvc tilt covers ld grp "hard tops'', including Luton style for £675, but in its :andard form there is no load .?straint (that is, headboard) etween the load area and the )ar of the cab.

For safety's sake a headboard nould be fitted to prevent high r loose loads entering the cab, >r example when braking in an rnergency, ummary augeot's 504 pickup has a noills rugged specification that is Dht for the job it is intended ir.

Its price is competitive, and it aeds to be to win its share of le annual sales of around 2,000 one-ton pickups in this Duntry, a market currently ominated by the Japanese ianufacturers.

There is room for improvelent in the 504, particularly by ie fitting of some kind of headoard, but its fuel economy over ur route was remarkably good nd will be difficult to beat for ny vehicle in its class.