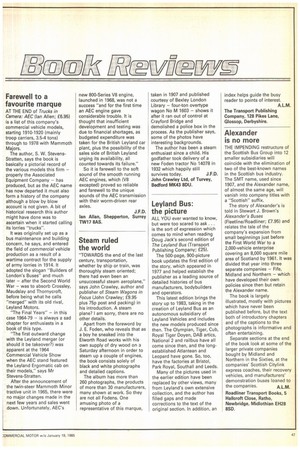 "TOWARDS the end of the last century, transportation, whether by ship or train, was thoroughly steam oriented; there had even been an unsuccessful steam aeroplane," says John Crawley, author and publisher of Steam Wagons in Focus (John Crawley; £9.95 plus 75p post and packing) in his introduction. A steam plane? I am sorry, there are no other details.

Apart from the foreword by J. E. Foden, who reveals that as a boy he sneaked into the Elworth Road works with his own supply of dry wood on a Saturday afternoon in order to steam up a couple of engines, the book consists solely of black and white photographs and detailed captions.

The album has more than 260 photographs, the products of more than 30 manufacturers, many shown at work. So they are not all Fodens. One amusing photo of a representative of this marque, taken in 1907 and published courtesy of Bexley London Library — four-ton overtype wagon No M 1603 — shows it after it ran out of control at Crayford Bridge and demolished a police box in the process. As the publisher says, some of the photos have interesting backgrounds.

The author has been a steam enthusiast since a child. His godfather took delivery of a new Foden tractor No 14078 in 1932 which happily still