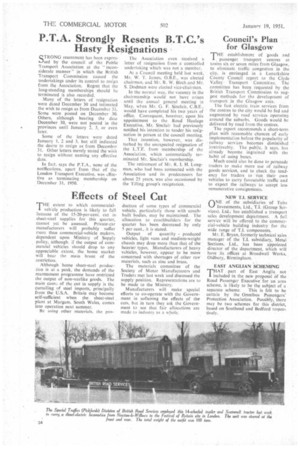 Page 38, 19th January 1951 — Council's Plan . for Glasgow
Close
Noticed an error?
If you've noticed an error in this article please click here to report it so we can fix it.
Keywords : Subdivisions Of Scotland, Glasgow, Names, Transport In Glasgow, United Kingdom, Scotland

THE establishment of 'goods and passenger transport centres at towns six or seven miles from Glasgow, to eliminate traffic congestion in the city, is envisaged in a Lanarkshire County Council report to the Clyde Valley Transport Committee. The committee has been requested by the British Transport Commission to suggest methods for the development of transport in the Glasgow area.

The report recommends a short-term plan with reasonable chances of early implementation before the popularity of railway services becomes diminished irretrievably. The public, it says, has already become ingrained with the habit of using buses.

Much could also be done to persuade traders to make more use of railway goods services, and to check the tendency for traders to run their own vehicles to carry favourable traffic and to expect the railways to accept less remunerative consignments.

ONE of the subsidiaries of Tube Investments, Ltd., T.I. (Group Services), Ltd., has established a transport sales development department. A full service will be offered to the commercial-vehicle building industry for the wide range of T.I. components. Mr. E. Bryan, formerly technical sales manager of the T.1. subsidiary, Metal Sections, Ltd., has been appointed director of the department, which will have its offices at Broadwell Works, Oldbury, Birmingham.

EAST ANGLIAN *SCHEMING THAT part of East Anglia not

included in the new proposal of the Road Passenger Executive for an area scheme, is likely to be the subject of a separate scheme. This is felt to be certain by the Omnibus Passengers' Protection Association. Possibly, there may be two schemes for this district, based on Southend and Bedford respectively.