Hargreaves to expand through acquisition 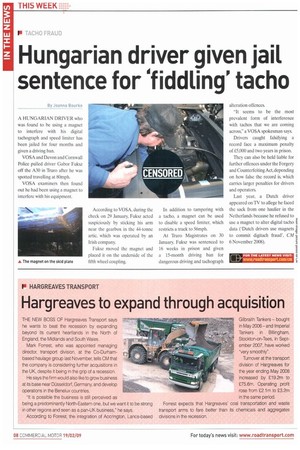 Page 8, 19th February 2009 — Hargreaves to expand through acquisition
Close
Noticed an error?
If you've noticed an error in this article please click here to report it so we can fix it.
Keywords : Billingham, Accrington, Hargreaves, Stockton-on-tees, Tank Ship, Haulage

THE NEW BOSS OF Hargreaves Transport says he wants to beat the recession by expanding beyond its current heartlands in the North of England, the Midlands and South Wales.

Mark Forrest, who was appointed managing director, transport division, at the Co-Durhambased haulage group last November, tells CM that the company is considering further acquisitions in the UK, despqe it being in the grip of a recession.

He says the f irm would also like to grow business at its base near DOsseldorf, Germany, and develop operations in the Benelux countries.

'It is possible the business is still perceived as being a predominantly North-Eastern one, but we want it to be strong in other regbns and seen as a pan-UK business,' he says.

According to Forrest, the integration of Accrington, Lanes-based Forrest expects that Hargreaves' transport arms to fare better than divisions in the recession. Gileraith Tankers bought in May 2006 and Imperial Tankers in Billingham, Stockton-on-Tees, in September 2007, have worked "very smoothly".

coal transportation and waste its chemicals and aggregates