Daf joins in the fight 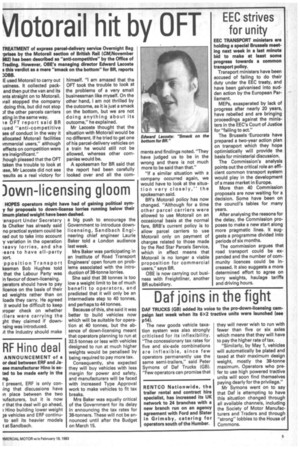 Page 7, 19th February 1983 — Daf joins in the fight
Close
Noticed an error?
If you've noticed an error in this article please click here to report it so we can fix it.
Keywords : Paccar, Daf Trucks, Articulated Vehicles, Semi-trailer Truck, Truck, Business / Finance

The new goods vehicle taxation system was also strongly criticised for its inflexibility. "The concessionary tax rates for five and six-axle combinations are inflexible, since few operators permanently use the same semi-trailers," said Peter Symons of Daf Trucks (GB). "Few operators can promise that they will never wish to run with fewer than five or six axles which means that they will have to pay the higher rate of tax.

"Similarly, by May 1, vehicles will automatically be plated and taxed at their maximum design weight, mostly the 38-tonne maximum. Operators who prefer to use high powered tractive units will soon find themselves paying dearly for the privilege."

Mr Symons went on to say that Oaf is attempting to have this situation changed through all available channels, including the Society of Motor Manufacturers and Traders and through "strong" lobbies to the House of Commons.