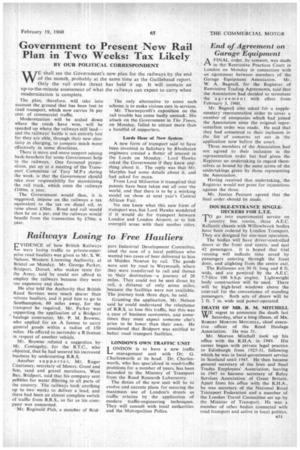 Page 35, 19th February 1960 — Railways Losing to Free Hauliers
Close
Noticed an error?
If you've noticed an error in this article please click here to report it so we can fix it.
Keywords : Bridport, Road Transport, Business / Finance

VIDENCE of how British Railways were losing traffic to private-enterprise road hauliers was given to Mr. S. W. Nelson, Western Licensing Authority, at Bristol on Monday. Mr. George Parker, Bridport, Dorset, who makes tents for the Army, said he could not afford to employ the railways because they were too expensive and slow.

He also told the Authority that British Road Services were much dearer than orivate hauliers, and it paid him to go to Southampton, 60 miles away, for the transport he required. Mr. Parker was supporting the application of a Bridpo: t haulage contractor. Mr. P. M. Browne, who applied for an A licence to carry general goods within a radius of 150 miles. He offered to surrender a B licence in respect of another vehicle.

Mr. Browne refuted a suggestion by Mr. Coningsby, for the B.T.C., who objected, that he had secured his increased business by undercutting B.R.S.

Another supporter, Mr. Roger Courteney, secretary of Messrs. Good and Son, sand and gravel merchants, West Bay, Bridport, said that his company sent pebbles for water filtering to all parts of the country. The railways took anything up to two weeks to deliver a load, and there had been an almost complete switch of traffic from B.R.S., so far as his company was concerned.

Mr. Reginald Fish, a member of Brid port Industrial Development Committee, cited the case of a local publican who wanted two cases of beer delivered to him at Maiden Newton by rail. The goods were sent by road to Weymouth, where they were transferred to rail and thence to Their destination—a journey of 20 miles. They could not be sent direct by rail, a distance of only seven miles, because the facilities were not available. The journey took three days, he said.

Granting the application. Mr. Nelson said he could understand the reluctance of B.R.S. to lose this traffic, but this. was a case of business economics, and sometimes they must expect someone else's price to be lower than their own. He considered that Bridport was entitled to better road transport facilities.

LLONDON is to have a new traffic management unit with Dr. G. Charlesworth at its head. Dr. Charlesworth, who has specalized in road-traffic problems for a number of years. has been seconded to the Ministry of Transport from the Road Research Laboratory.

The duties of the new unit will be to evolve and execute plans for securing the maximum use of London's streets as traffic arteries by the application of modern traffic-engineering techniques. They will consult with local authorities and the Metropolitan Police.