ONE HEARS That they're still busy liquidating. 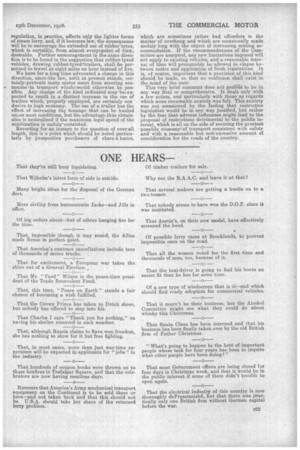 Page 3, 19th December 1918 — ONE HEARS That they're still busy liquidating.
Close
Noticed an error?
If you've noticed an error in this article please click here to report it so we can fix it.

That Wilhelm's latest form of side is suicide.

Many bright ideas for the disposal of the German fleet.

—0 01 big orders about—but of others hanging fire for the time.

That, impossible though it may sound, the Allies made Neusz in perfect quiet.

That America's contract cancellations include tens of thousands of motor trucks.

That for excitement, a European war takes the shine out of a General Election., That Mr. " Faed " Wilson is the peace-time president of the Trade Benevolent Fund.

That, this time, "Peace on Earth" stands a fair chance of becoming a, wish fulfilled.

That the Crown Prince has taken -to Dutch shoes, but nobody has offered to step into his.

That Charles I says "Thank you for nothing," on baying his shelter removed in such weather.

That, although Russia claims to nave won freedom, she has nothing to show for it but free fighting.

That, in most cases, more than just war-time experience will be expected in applicants for "jobs" in the industry.

That hundreds of coupon books were thrown on to those bonfires in Trafalgar Square, and that the celebrators are now having meatless days.

Rumours that America's Army mechanical transport equipment on the Continent is to be said there or here—and not taken back and that this should not be. U.S.A. should take her share of the returned lorry problem. Of timber trailers for sale.

That severs,' makers are getting a hustle on to a two-tonner.

That nobody seems to have wen the D.O.P. since it was instituted.

That Austin's, on their new model, have effectively screened the hood.

Of possible lorry races at Brooklands, to prevent impossible ones on the road.

That all the women voted for the first time and thousands of men, too, because of it.

That the taxi-driver is going to find his boots an easier fit than he has for some time.

Of a new type of windscreen that is it—and which should find ready adoption for commercial vehicles.

That it mayn't be their business, but the Alcohol Committee might see what they could do about whisky this Christmas.

That Santa Claus has been interned and that his business has been finally taken over by the old British firm of Father Christmas.

"What's going to happen to the host of important people whose task for four years has been to inquire what other people have been doing?"

That most Government offices are being closed for four days in Christmas week, and that it would be in the public interest if some of them didn't trouble to open again.

That the electrical industry of this country is now thoroughly dePrussianiled, but that there was practically only one British firm without German capital before the war.