Making a Speciality of Commercial-vehicle Repairs 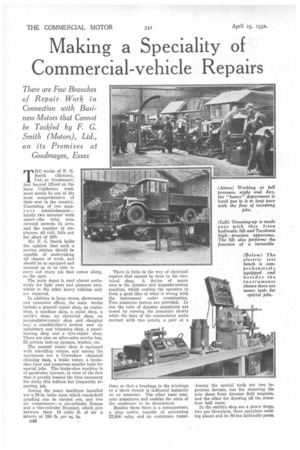 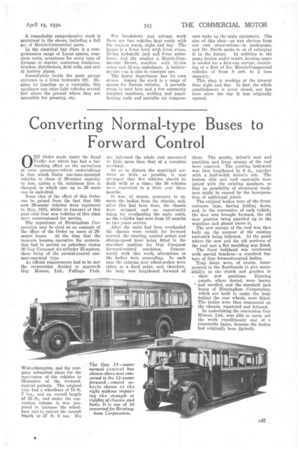 There are Few Branches of Repair Work in Connection with Business Motors that Cannot be Tackled by F. G. Smith (Motors), Ltd., on its Premises at

Smith (Motors), Ltd., at Goodmayes, just beyond Ilford on the main Colchester road, must surely be one of the most comprehensive of their sort in the country. Consisting of two separate establishments— barely two minutes' walk apart—the total area covered exceeds 14 acre, and the number of employees, all told, falls not far short of 200.

Mr. F. G. Smith bolds the opinion that such a service station should be capable of undertaking all classes of work, and should be so equipped and manned as to be able to carry out every job that comes along, on the spot.

The main depot is used almost exclusively for light vans and pleasure cars, whilst in the other heavy vehicles only arc repaired.

In addition to large stores, showrooms and extensive offices, the main works include a general repair shop, an engine shop, a machine shop, a paint shop, a smith's shop, an electrical shop, an accumulator-repair shop and charging buy, a coachbuilder's section and an upholstery and trimming shop, a panelbeating shop and a tyre-repair shop. There are also an after-sales service bay, 52 private lock-up garages, washes, etc.

The general repair shop is equipped with travelling cranes, and among the appliances are a Crawshaw chemical cleaning tank, a brake tester, a brakeshoe liner and numerous smaller tools for special jobs. The brake-shoe machine is of particular interest, in view of the fact that it greatly lessens the time necessary for doing this tedious but frequently recurring job.

Among the many machines installed are a 24-in, lathe upon which crankshaft grinding can be carried out, and two air compressors—a six-cylinder Romac and a two-cylinder Brunner, which give between them 18 cable ft. of air a minute at 150 lb. per sq. in.

tried l shop. A device of many uses is the dynamo and magneto-testing machine, which enables the operator to form a good idea of what is wrong with the instrument under examination. Two armature testers are provided. In one the coils of dynamo armatures are tested by turning the armature slowly while the bars of the commutator make contact with two points, a pair at a time, so that a breakage in the windings or a short circuit is indicated instantly on all ammeter. The other tests magneto armatures and enables the state of the condenser to be determined.

Besides these there is a renlagnetizer, a plug tester,, capable of generating 27,000 volts, and an endurance tester. Among the special tools are two ingenious devices, one for removing the pole shoes from dynamo field magnets, and the other for drawing off the armature ball races.

In the smith's shop are a power forge, two gas blowpipes, three acetylene welding plants and an SO-ton hydraulic press. A remarkably comprehensive stock is contained in the stores, including a full vet of Morris-Commercial parts.

In the electrical bay there is a comprehensive range of Lamas spares, complete units, armatures for every type of dynamo or starter, numerous magnetos, brushes, distributors, field coils, and sets of battery plates.

Immediately inside the main garage entrance is a 3-ton hydraulic lift. Besides its function as a turntable, this appliance can raise light vehicles several feet above the ground where they are accessible for greasing, etc. Por breakdown and salvage wort there are two vehicles kept ready with the engines warm, night and day. The larger is a 5-ton lorry with 5-ton crane, 10-ton hydraulic jack an 5-ton ambulance, and the smaller a Morris-Commercial 30-cwt. machine with 2i-ton crane and 2i-ton ambulance. A batteryservice van is also in constant use.

The heavy department has its own stores. Among the stock is a range of spares for Dennis vehicles. A portable crane is used here and a few commonly required machines, welding and panelbeating tools and portable air compres

sore make up the main equipment. The size of this shop—as was obvious from our own observations—is inadequate, and Mr. Smith spoke to us of enlarging it in the future. In addition to the many lorries under repair, housing space is needed for a hire-van service, consisting of a fleet of five Morris-Commercial vehicles of from 8 curt, to 2 tons capacity.

This shop is working at the present time night and day. In fact, the whole establishment is never closed, nor has been since the day it was originally opened.