A Useful Accessory for Fords 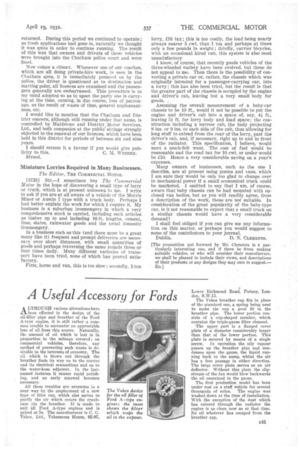 Page 63, 19th April 1932 — A Useful Accessory for Fords
Close
Noticed an error?
If you've noticed an error in this article please click here to report it so we can fix it.

ALTHOUGH various alterations have been effected in the design of the oil-filler pipe and breather of the Ford A-type engine, it is still rattier a common trouble to encounter an appreciable loss of oil from this source. Naturally, the amount of oil which is lost is in proportion to the mileage covered ; on commercial vehicles, therefore, any method of preventing such waste is desirable in the interests of economy. The oil which is blown out through the breather finds its way on to the starter and its electrical connections and on to the water-hose adjacent. In the lastnamed instance it causes rapid perishing, and an early renewal becomes necessary.

All these troubles are overcome in a neat way by the employment of a new type of filler cap, which also serves to purify the air which enters the crankcase via the breather. It is made to suit all Ford A-type engines and is priced at 5s. The manufacturer is C. G. Yokes, Ltd., Vokesacess House, 95-97, Lower Richmond Road, Putney, London. S.W.15.

The Vokes breather cap fits in place of the standard one, a spring being used to make the cap a good fit in the breather pipe. The. lower portion consists of a cup-shaped member, which contains the triple-gauze filter element.

The upper part is a flanged cover plate of a diameter considerably larger than that of the lower portion. This plate is secured by means of •a single screw. In operation the oily vapour passes up the breather pipe and condenses upon the gauze, the liquid running back to the sump, whilst the air has a free passage in either direction. The large cover plate serves as an air deflector. Without this plate the slipstream of the fan would blow backwards the oil contained in the gauze.

The first production model has been under test on a staff vehicle for several thousands of miles. The 'engine was washed down at the time of installation. With the exception of the dust which has entered through the radiator the engine is as clean now as at that time. No oil whatever has escaped from the breather cap.