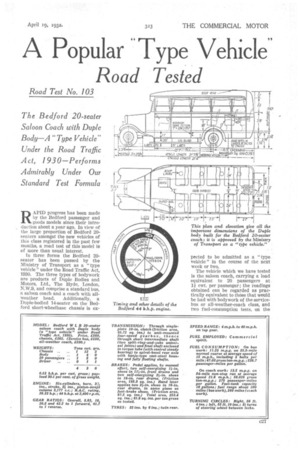 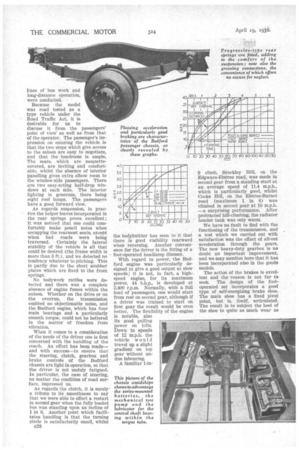 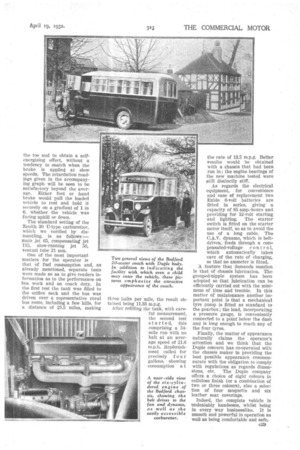 Page 49, 19th April 1932 — A Popular "Type Vehicle"
Close
Noticed an error?
If you've noticed an error in this article please click here to report it so we can fix it.

RAPID pzogress has been made by the Bedford passenger and goods models since their introduction about a year ago. In view of the large proportion of Bedford 20seaters amongst the new vehicles of this class registered in the past few months, a road test of this model is of more than usual interest.

in three forms the Bedford 20seater has been passed by the Ministry of Transport as a 'type vehicle" under the Road Traffic Act, 1030. The three types of bodywork are products of Duple Bodies and Motors, Ltd., The Hyde, London, N.W.9, and comprise a standard bus, a saloon coach and a coach with allweather head. Additionally, a Duple-bodied 14-seater on the Bedford short-wheelbase chassis is ex

pected to be admitted as a "type vehicle" in the course of the next week or two.

The vehicle which we have tested is the saloon coach, carrying a load equivalent to 20 passengers at 1:1 cwt. per passenger ; the readings obtained can be regarded as practically equivalent to those that would be had with'bodywork of the servicebus or all-weather-coach class, and two fuel-consumption tests, on the

lines of bus work and long-distance operation, were conducted.

Because the model was road tested as a

type vehicle under the Road Traffic Act, it is desirable for us to discuss it from the passengers' point of view as well as from that of the operator. The passenger's impression on entering the vehicle is that the two steps which give access to the saloon are easy to negotiate, and that the headroom is ample. The seats, which are moquettecovered, are inviting and comfortable, whilst the absence of interior panelling gives extra elbow room to the window-side passengers. There are two easy-acting half-drop windows at each side, The interior lighting is generous, there being eight roof lamps. The passengers have a good forward view.

As regards suspension, in practice the helper leaves incorporated in the rear springs prove excellent ; it was noticed that one could comfortably make• pencil notes when occupying the rearmost seats, except when bad roads were being traversed. Certainly the lateral stability of the vehicle is all that could be desired (the frame width is more than 3 ft.), and we detected no tendency whatever to pitching. This is partly due to the short snubber plates which are fixed to the front springs.

No bodywork rattles were detected and there was a complete absence of engine fumes within the saloon. Whether on the drive or on the overrun, the transmission emitted no objectionable noise, and the Bedford engine, which has four main bearings and a particularly smooth torque, could not be bettered in the matter of freedom from vibration.

When it comes to a consideration of the needs of the driver one is first concerned with the handling of the coach. An effort has been made— and with success—to ensure that the steering, clutch, gearbox and brake controls of the Bedford chassis are light in operation, so that the driver is not unduly fatigued. In particular, the ease of steering, no matter the condition of road surface, impressed us.

As regards the clutch, it is surely

a tribute to its smoothness to say that we were able to effect a restart in second gear when the fully loaded bus was standing upon an incline of 1 in 6. Another point which facilitates handling is that the turning circle is satisfactorily small, whilst

the bodybuilder has seen to it that there is good visibility rearward when reversing. Another convenience for the driver is the fitting of a foot-operated headlamp dimmer.

With regard to power, the Bedford engine was particularly designed to give a good output at slow speeds ; it is not, in fact, a highspeed engine, for its maximum power, 44 b.h.p., is developed at 2,400 r.p.m. Normally, with a full load of passengers, one would start from rest on second gear, although if a driver was trained to start on first gear the result would be even better. The flexibility of the engine is notable, also its good pulling power on hills. Down to speeds of 12 m.p.h. the vehicle would travel up a slight gradient on top gear without undue labouring.

9 climb, Brockley Hill, on the Edgware-Eistree road, was made in second gear from a standing start at an average speed of 11.4 m.p.h., which is particularly good, whilst Cocks Hill, on the Elstree-Barnet road (maximum 1 in 6) was climbed in second gear at 10 m.p.h. —a surprising performance. After protracted hill-climbing, the radiator header tank was only warm.

We have no fault to find with the functioning of the transmission, and a test which we carried out with satisfaction was the effect of all-out acceleration through the gears. The new heavy-duty gearbox is no doubt an important improvement, and we may mention here that it has been incorporated also in the goods models.

The action of the brakes is excellent and the reason is not far to seek. The design of the foot-, operated set incorporates a good type of self-energizing brake shoe. The main shoe has a fixed pivot point, but is, itself, articulated. The result is to subject the heel of the shoe to quite as much wear as

the toe and to obtain a selfenergizing effect, without a tendency to snatch when the brake is applied at slow speeds. The retardation readings given in the accompanying graph will be seen to be satisfactory beyond the average. Either foot or hand brake would null the loaded vehicle to rest and hold it securely on a gradient of 1 in 6, whether the vehicle was facing uphill or down.

The standard setting of the Zenith 30 U-type carburetter, which we verified by dismantling, is as follows:— main jet 65, compensating jet 115, slow-running jet 50, venturi tube 21 mm.

One of the most important matters for the operator is that of fuel consumption and, as already mentioned, separate tests were made so as to give readers information as to the performance on bus work and on coach duty. In the first test the tank was filled to the orifice neck and the bus was driven over a representative rural bus route, including a few hills, for a distance of 25.5 miles, making three halts per mile, the result obtained being 11.33 m.p.g.

After refilling the tank, with careful measurement, the second test started, this comprising a 54mile run with no halt at an average speed of 21.6 m.p.h. Replenishment called for precisely f our gallons, showing consumption a t the rate of 13.5 m.p.g. Better results would be obtained with a chassis that had been run in; the engine bearings of the new machine tested were still distinctly stiff.

As regards the electrical equipment, for convenience and ease of replacement two Exide 6-volt batteries are fitted in series, giving a capacity of 85 amp.-hours and providing for 12-volt starting and lighting. The starter switch is fitted on the starter motor itself, so as to avoid the use of a long cable. The C.A.V. dynamo, which is beltdriven, feeds through a compensated-voltage con tro I, which automatically takes care of the rate of charging, so that no ammeter is fitted.

A feature that demands mention is that of chassis lubrication. The grouped-nipple system has been adopted so that lubrication can be efficiently carried out with the minimum of time and trouble. In thiS matter of maintenance another important point is that a mechanical tyre pump is fitted as standard to the gearbox; the lead, incorporating a pressure gauge, is conveniently connected to a point below the dash and is long enough to reach any of the four tyres.

Finally, the matter of appearance naturally claims the operator's attention and we think that the Duple concern has co-operated with the chassis maker in providing the best possible appearance commensurate with the obligation to comply with regulations as regards dimensions, etc. The Duple company offers a choice of eight colours in cellulose finish (or a combination of two or three colours), also a selection of four moquette and six leather seat coverings.

Indeed, the complete vehicle is undeniably handsome, whilst being in every way businesslike. It is smooth and powerful in operation as well as being comfortable and safe.