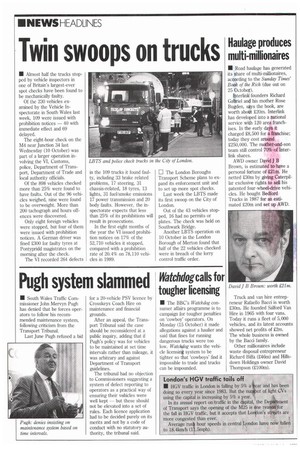 that he forces operators to follow his recommended maintenance system, following criticism from the Transport Tribunal.

Last June Pugh refused a bid for a 20-vehicle PSV licence by Crosskeys Coach Hire on maintenance and financial grounds.

After an appeal, the Transport Tribunal said the case should be reconsidered at a public inquiry, adding that if Pugh's policy was for vehicles to be maintained at set time intervals rather than mileage, it was arbitrary and against Department of Transport guidelines.

The tribunal had no objection to Commissioners suggesting a system of defect reporting to operators as a practical way of ensuring their vehicles were well kept — but these should not be elevated into a set of rules. Each licence application had to be decided purely on its merits and not by a code of conduct with no statutory authority, the tribunal said.