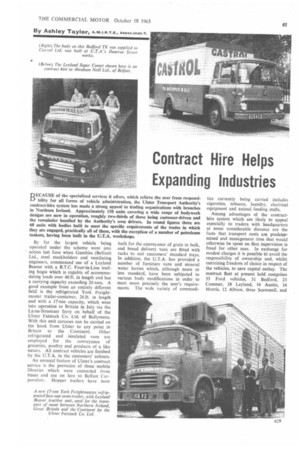 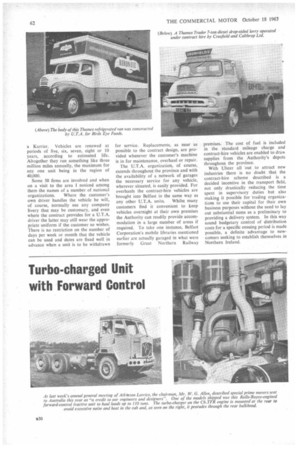 Page 63, 18th October 1963 — Contract Hire Helps Expanding Industries
Close
Noticed an error?
If you've noticed an error in this article please click here to report it so we can fix it.

DECAUSE of the specialized services it offers, which relieve the user from responsi

bility for all forms of vehicle administration, the Ulster Transport Authority's contract-hire system has made a strong appeal to trading organizations with branches in Northern Ireland. Approximately 150 units covering a wide range of bodywork designs are now in operation, roughly two-thirds of these being customer-driven and the remainder handled by the Authority's own drivers. In round figures there are 60 units with bodies built to meet the specific requirements of the trades in which they are engaged, practically all of these, with the exception of a number of petroleum tankers, having been built in the U.T.A. workshops.

By far the largest vehicle being operated under the scheme went into action last June when Gambles (Belfast) Ltd., steel stockholders and ventilating engineers, commenced use of a Leyland Beaver with a B.T.C. Four-in-Line trailing bogie which is capable of accommodating loads over 40 ft. in length and has a carrying capacity exceeding 20 tons. A good example from an entirely different field is the refrigerated York Freightmaster trailer-container, 26 ft. in length and with a 17-ton capacity, which went into operation to Britain in July via the Larne-Stranraer ferry on behalf of the Ulster Fatstock Co. Ltd. of Ballymena. With this unit carcases can be carried on the hook from Ulster to any point in Britain or the Continent. Other refrigerated and insulated vans are employed for the conveyance of groceries, poultry and products of a like nature. All contract vehicles are finished by the U.T.A. in the customers' colours.

An unusual feature of Ulster's contract service is the provision of three mobile libraries which were converted from buses and are on hire to Belfast Corporation. Hopper trailers have been built for the conveyance of grain in bulk, and bread delivery vans are fitted with racks to suit customers' standard trays. In addition, the U.T.A. has provided a number of furniture vans and mineral water lorries which, although more or less standard, have been subjected to various body modifications in order to meet more precisely the user's requirements. The wide variety of commodi ties currently being carried includes cigarettes, tobacco, laundry, electrical equipment and animal feeding stuffs.

Among advantages of the contracthire system which are likely to appeal especially to traders with headquarters at some considerable distance are the facts that transport costs are predetermined and management time that would otherwise be spent on fleet supervision is freed for other uses. In exchange for modest charges it is possible to avoid the responsibility of ownership and, whilst exercising freedom of choice in respect of the vehicles, to save capital outlay. The contract fleet at present held comprises 35 Ford vehicles, 31 Bedford, 23 Commer, 18 Leyland, 16 Austin, 14 Morris, 12 Albion, three Scammell, and a Karrier. Vehicles are renewed at periods of five, six, seven, eight or 10 years, according to estimated life. Altogether they run something like three million miles annually, the maximum for any one unit being in the region of 40,000.

Some 50 firms are involved and when on a visit to the area I noticed among them the names of a number of national organizations. Where the customer's own driver handles the vehicle he will, of course, normally use any company livery that may be customary, and even where the contract provides for a U.T.A. driver the latter may still wear the appropriate uniform if the customer so wishes. There is no restriction on the number of days per week or month that the vehicle can be used and dates are fixed well in advance when a unit is to be withdrawn for service. Replacements, as near as possible to the contract design, are provided whenever the customer's machine is in for maintenance, overhaul or repair.

The U.T.A. organization, of course, extends throughout the province and with the availability of a network of garages the necessary service for any vehicle, wherever situated, is easily provided. For overhauls the contract-hire vehicles are brought into Belfast in the same way as any other U.T.A. units. Whilst many customers find it convenient to keep vehicles overnight at their own premises the Authority can readily provide accommodation in a large number of areas if required. To take one instance, Belfast Corporation's mobile libraries mentioned earlier are actually garaged in what were formerly Great Northern Railway premises. The cost of fuel is included in the standard mileage charge and contract-hire vehicles are enabled to draw supplies from the Authority's depots throughout the province.

With Ulster all out to attract new industries there is no doubt that the contract-hire scheme described is a decided incentive in the transport field, not only drastically reducing the time spent in supervisory duties but also making it possible for trading organizations to use their capital for their own business purposes without the need to lay out substantial sums as a preliminary to providing a delivery system. In this way sound budgetary control of distribution costs for a specific ensuing period is made possible, a definite advantage to newcomers seeking to establish themselves in Northern Ireland.