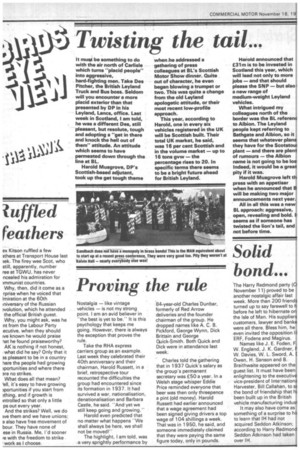 The Harry Redmond party (C) November 11) proved to be another nostalgic affair last week. More than 200 friends turned up to say farewell to h before he left to hibernate on the Isle of Man. His suppliers customers, lawyer and banke were all there. Bless him, he even invited the opposition lil ERF, Fodens and Magirus.

Names like J. E. Foden, F. W. England, J. K. Gardner, F W. Davies, W. L. Sword, A. Owen, H. Sanson and B. Braithwaite appeared on the guest list. It must have been enlightening to the executive vice-president of Intemationa Harvester, Bill Callahan, to SE the bond of friendship that hE been built up in the British vehicle manufacturing indual