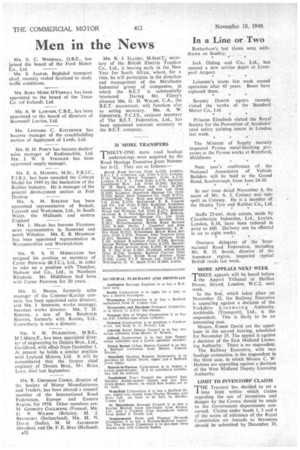 Page 34, 18th November 1949 — Men in the News
Close
Noticed an error?
If you've noticed an error in this article please click here to report it so we can fix it.
Keywords : Paterson, New Jersey

MR. RORY MORE OPERRALL has been appointed to the board of the Texas Co (of Ireland), Ltd.

• MR. A. W LawsoN, C.B.E,, has been appointed to the hoard of directors of Scammell Lorries, Ltd.

MR. LEONARD C. KITCHENER has become manager of the coachbuilding section of Appleyard of Leeds, Ltd.

-— MP. E. A. MURPHY, M.Sc., F.R.I.C., F.I.R.L. has been awarded the Colwyn Medal for 1940 by the Institution of the Rubber Industry. He is manager of the general development section at Fort Dunlop.

MR. Wi S. H. • MIDDLETON has resigned his position as secretary of Carter Paterson (41.T.C.), Ltd., in order to take up a position with Thatcher, Hobson and Co., Ltd., in Northern Rhodesia. Mr. Middleton had been with Carter Paterson for 20. years.

A32 MR. R. J. ELLERY, M.111St.T., secretary of the British Electric Tractimt Co., Ltd., is leaving early in the New Year for South Africa, where, for a time, he will participate in the direction and management of the Merchants Industrial group of companies, in which the B.E.T is substantially interested. During Mr. • Ellery's absence MR. G. H. Waists, C.A., the B.E.T. accountant, will function also as acting secretary. MR, A. W. GROOCOCK, F.C.I.S., assistant secretary of The B.E.T. Federation, Ltd., has been appointed assistant secretary to theB.E.T. company.