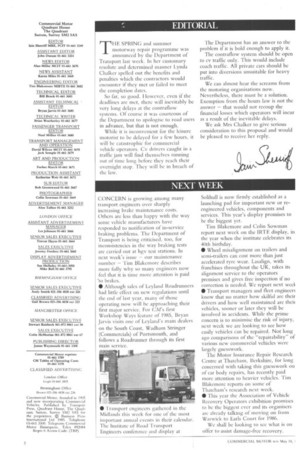 Page 4, 18th May 1985 — NEXT WEEK
Close
Noticed an error?
If you've noticed an error in this article please click here to report it so we can fix it.
Keywords : Emergency Road Service, Vehicle Recovery, Irte, Tire, Mot Test, Semi-trailer Truck

CONCERN is growing among many transport engineers over sharply increasing brake maintenance costs. Others are less than happy with the way some vehicle manufacturers have responded to notification of in-service braking problems. The Department of Transport is being criticised, too, for inconsistencies in the way braking tests are carried out at hgv test stations. In next week's issue — our maintenance number — Tim Blakernore describes more fully why so many engineers now feel that it is time more attention is paid to brakes.

• Although sales of Leyland Roadrunners had little effect on new regulations until the end of last year, many of those operating now will be approaching their first major service. For GM's first Workshop Ways feature of 1985, Bryan Jarvis visits one of Leyland's main dealers on the South Coast, Wadham Stringer (Commercials) of Portsmouth, and follows a Roadrunner through its first main service. Solihull is now firmly established as a launching pad for important new or reengineered vehicles, components and services. This year's display promises to be the biggest yet.

Tim Blakemore and Colin Sowman report next week on the IRTE display, in the year when the institute celebrates its 40th birthday.

• Wheel misalignment on trailers and semi-trailers can cost more than just accelerated tyre wear. Lasalign, with franchises throughout the UK, takes its alignment service to the operators premises and gives free inspection if no correction is needed. We report next week • Transport managers and fleet engineers know that no matter how skilful are their drivers and how well maintained are their vehicles, sooner or later they will be involved in accidents. While the prime concern is to minimise the risk of injury, next week we are looking to see how easily vehicles can be repaired. Not long ago comparisons of the "repairability" of various new commercial vehicles were largely guesswork.

The Motor Insurance Repair Research Centre at Thatcham, Berkshire, for long concerned with taking this guesswork ou of car body repairs, has recently paid more attention to heavier vehicles. Tim Blakemore reports on some of Thatcham's research next week.

• This year the Association of Vehicle Recovery Operators exhibition promises to he the biggest ever and its organisers are already talking of moving on from Warwick to Earls Court for 1986.

We shall be looking to see what is on offer to assist damage-free recovery.