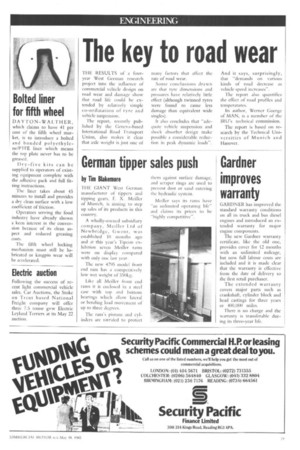 Page 21, 18th May 1985 — German tipper sales push
Close
Noticed an error?
If you've noticed an error in this article please click here to report it so we can fix it.
Keywords : Naval Ram

THE GIANT West German manufacturer of tippers and tipping gears, F. X. Meillcr of Munich, is aiming to step up sales of its products in this country.

A wholly-owned subsidiary company, MeiIler Ltd of Newbridge, Gwent, was established 10 months ago and at this year's Tipcon exhibition seven MeiIler rams were on display compared with only one last year.

Like all MeiHer front end rams it is enclosed in a steel case with top and bottom bearings which allow lateral or bending load movement of up to three degrees.

The ram's pistons and cylinders are nitrided to protect them against surface damage, and scraper rings are used to prevent dust or sand entering the hydraulic system.

Meiller says its rams have "an unlimited operating life" and claims its prices to be "highly competitive".