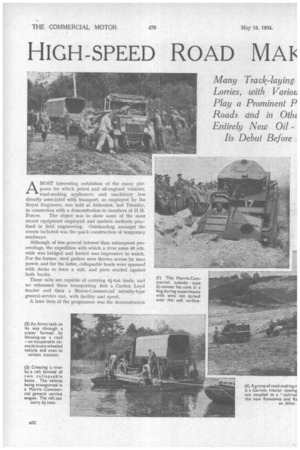 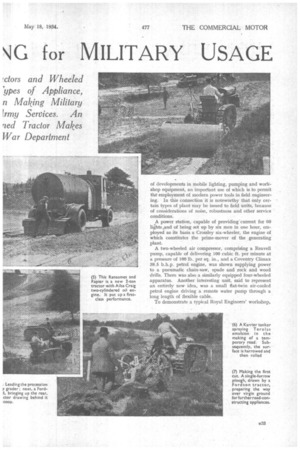 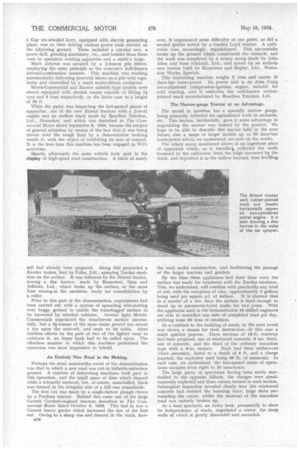 \IGH for MILITARY USAGE AMOST interesting exhibition of the many purposes for which petrol and oil-engined vehicles, road-making appliances, and machincry less directly associated with transport, as employed by the Royal Engineers, was held at Aldershot, last Tuesday, in connection with a demonstration to members of H.M.

Forces. The object was to show some of the most recent equipment employed and modern methods practised in field engineering. Outstanding amongst the events included was the quick construction of temporary roadways.

Although of less general interest than subsequent proceedings, the expedition with which a river some 40 yds. wide was bridged and ferried was impressive to watch. For the former, steel girders were thrown across by man power, and for the latter, collapsable boats were spanned with decks to form a raft, and piers erected against both banks.

These rafts are capable of carrying 44-ton loads, and we witnessed them transporting first a Carden Loyd tractor and then a Morris-Commercial subsidy-type general-service van, with facility and speed.

A later item of the programme was the demonstration

of developments in mobile lighting, pumping and workshop equipment, an important use of which is to permit the employment of modern power tools in field engineering. In this connection it is noteworthy that only certain types of plant may be issued to field units, because of considerations of noise, robustness and other service conditions.

A power station, capable of providing current for 60 lig-.hts,and of being set up by six men in one hour, employed as its basis a Crossley six-wheeler, the engine of which constitutes the prime-mover of the generating plant.

A two-wheeled air compressor, comprising a Reavell pump, capable of delivering 100 cubic ft. per minute at a pressure of 100 lb. per sq. in., and a Coventry Climax 38.5 b.h.p. petrol engine, was shown supplying power to a pneumatic chain-saw, spade and rock and wood drills. There was also a similarly equipped four-wheeled apparatus. Another interesting unit, said to represent an entirely new idea, was a small flat-twin air-cooled petrol engine driving a remote water pump through a long length of flexible cable.

To demonstrate a typical Royal Engineers' workshop, a Guy six-wheeled lorry, equipped with electric generating plant, was on view driving various power tools erected on the adjoining ground. These included a circular saw, a power drill, grinding machinery, etc., and besides these there were in operation welding apparatus and a smith's forge.

Much intei.est was aroused by a Johnson pile driver, employing the same principle as the concern's well-known internal-combustion rammer. This machine was working automatically delivering powerful blows on a pile with regularity and controlled by a small motor-driven contactor.

Morris-Commercial and Karrier subsidy-type models were shown equipped with derrick cranes capable of lifting 21 tons and 5 tons respectively, in the latter case to a height of 20 ft.

While the party was inspecting the last-named pieces of apparatus, one of the new Bristol tractors with a Jowett engine and an endless track made by koadless Traction, Ltd., Hounslow, and which was described in The Commercial Motor dated September 8, 1933, became the subject of general attention by reason of the fact that it was being driven over the rough land by a demonstrator walking beside it, with the object of exhibiting its ease of control. It is the first time this machine has been engaged in W.D. activities.

Shortly afterwards the same vehicle took part in the display of high-speed road construction. A track of sandy soil had already been prepared. Along this proceeded a Kamer tanker, lent by Colas. Ltd., spraying Ter°las emulsion on the surface. It was followed by the Bristol tractor, towing a disc harrow, made by Ransornes, Sims and Jefferies, Ltd., which broke up the surface, at the same time mixing-in the emulsion, ready for consolidation by a roller.

Prior to this part of the demonstration, experiments had been carried out with a system of spreading wire-netting over boggy ground to enable the waterlogged surface to

he traversed by wheeled vehicles. Several light MorrisCommercials negotiated the treacherous surface successfully, but a 3i-twiner of the same make proved too severe a tax upon the network, and sank to its axles. After fruitless efforts on the part of two of the lighter vans to extricate it, an Army tank had to be called upon. The effortless manner in which this machine performed the operation was most impressive to behold.

An Entirely New Road in the Making.

Perhaps the most noteworthy event of the demonstration was that in which a new road was cut in hitherto-unbroken ground. A number of interesting machines took part in this operation, and the small space of time which elapsed while a tolerably surfaced, but, of course, unmetalled, track was formed in the irregular side of a hill was remarkable.

The first cut was made by a single-furrow plough drawn by a Fordson tractor. Behind this came one of the large Garrett Gardner-engined tractors described in The Commercial Moor dated October 6, 1933. This had in tow a Garrett heavy grader which increased the size of the first cut. Owing to a sharp rise and descent in the track, how

13:34 ever, it experienced some difficulty at one point, as did a second grader towed by a Carden Loyd tractor. A cultivator was, accordingly, requisitioned. This successfully broke up the ground which constituted the obstacle, and the work was completed by a rotary scoop made by .John Allen and Sons (Oxford), Ltd., and towed by an entirely new tractor built by Rausornes and Rapier, Ltd., Waterside Works, Ipswich.

The Narrow-gauge Tractor at an Advantage.

The model in question has a specially narrow gauge, being primarily intended for agricultural work in ,orchards, etc. This feature, incidentally, gave it some advantage in negotiating the narrow way formed by the graders. We hope to be able to describe this tractor fully in the near future, also a range of larger models up to 50 draw-bar horSe-power which, we understand, are now on the stocks. The rotary scoop mentioned above is an ingenious piece of apparatus which, as it travelled collected the earth loosened by the cultivator, from the ridge traversed by the track, and deposited it in the hollow beyond, thus levelling the road under construction, and facilitating the passage of the larger tractors and graders.

By the time these appliances had done their work the surface was ready for treatment with the Terolas emulsion. This, we understand, will combine with practically any kind of soil, with the exception of clay, approximately 2 gallons being used per square yd. of surface. It is claimed that in a matter of a few days the surface is hard enough to stand up to pneumatic-tyred traffic for two years. With the apparatus used in the demonstration 40 skilled engineers are able to construct one mile of completed road per day, utilizing some 60 tons of emulsion.

As a contrast to the building of roads, in the next event was shown a means for their destruction—in this case a much quicker process. Three sections of 18-ft. roadway had been prepared, one of reinforced concrete, 6 ins, thick, one of concrete, and the third of the ordinary macadam

type with a 9-in. surface. Each had been surface-cut where necessary, bored to a depth of 6 ft. and a charge inserted, the explosive used being 80 lb. of ammonal. In each case, we understand, the last-named series of operations occupies from eight to 16 man-hours.

The large party of spectators having been safely marshalled to the opposite hillside, the charges were simultaneously exploded and three craters formed in each section. Subsectuent inspection revealed clearly how the reinforced concrete had resisted the bursting force, large slabs surrounding the crater, whilst the material of the macadam road was entirely broken up.

As a final spectacle, an Army tank, presumably to show its independence of roads, negotiated a crater, the steep walls of which it gently descended and ascended.