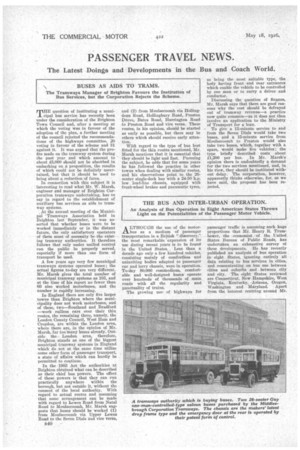 Page 22, 18th May 1926 — PASSENGER TRAVEL NEWS.
Close
Noticed an error?
If you've noticed an error in this article please click here to report it so we can fix it.
Keywords : Moulsecoomb, Transport In Brighton And Hove, Tram, Brighton, Nottingham, Brighton & Hove

BUSES AS AIDS TO TRAMS.

The Tramways Manager of Brighton Favours the Institution of Bus Services, but the Corporation Rejects the Scheme.

flIHE question of instituting a muni

cipal bus service has recently been under the consideration of the Brighton Town Council and, after a meeting at which the voting was, in favour of the adoption of the plan, a further meeting of the council rejected the recommendations of the highways committee, 20 voting in favour of the scheme and 31 against it. It was argued that the profits made on the tramway system during the past year and which amount to about £5,000 should not be absorbed in embarking on a proposition, the results of which could not be definitely ascertained, but that it should be used to bring about a reduction of fares.

In connection with this subject it is interesting to read what Mr. W. Marsh, engineer arid manager of Brighton Corporation tramways undertaking, has TO say in regard to the establishment of auxiliary bus services as aids to tramvvay systems.

. At the annual meeting of the Municipal Tramways Association held in Brighton last September, it was asserted that whether buses were to be worked immediately or in the distant future, the only satisfactory operators of them must of necessity be the existing tramway authorities. It therefore follows that only under unified control can the public be properly served, especially if more than one form of transport be used.

A few years ago very few municipal tramways systems operated buses; the actual figures to-day are very different. Mr. Marsh gives the total number of municipal tramway systems as 103, and at the time of his report no fewer than 66 also worked motorbuses, and the number is rapidly increasing.

In England there are only five larger towns than Brighton where the municipality does not work motorbuses, and of these, two—Southend and Bradford —work railless cars over their thin routes, the remaining three, namely, the London County Council, West Ham and Croydon, are within the London area, where there are, in the opinion of Mr. Marsh, far too many buses already. Outaide the London area, therefore, Brighton stands as one of the biggest municipal tramway systems in England which do not at the same time utilize some other form of passenger transport, a state of affairs which can hardly be permitted to continue.

In the 1903 Act the authorities at Brighton obtained what can be described as their chief bus powers. The effect of these powers is that they can run practically anywhere within the borough, but not outside it, without the consent of the local authority. With regard to actual routes and assuming that some arrangement can be made with regard to Lewes Road from Natal Road to Moulsecoomb, Mr. Marsh suggests that buses should be worked (1) from Moulsecoomb via Upper Lewes Road to the Seven Dials and vice versa,

and (2) from Moulsecoomb via Rollingdean Road, Hollingbury Road, Preston prove, Bates Road, Harrington Road to Preston Road and vice versa. These routes, in his opinion, should be started as early as possible, but there may he others which should receive early attention.

With regard to the type of bus best fitted for the thin routes mentioned, Mr. Marsh mentions that it is essential that they should be light and fast. Pursuing the subject, he adds that for some years he has followed the practice in other towns when dealing with similar routes, and his observations point to the 26seater single-deck bus with a 24-30 h.p. low load-line chassis, equipped with front-wheel brakes and pneumatic tyres, as being the most suitable type, the body having front and rear entrances which enable the vehicle to be controlled by one man or to carry a driver and conductor.

Discussing the question of finance, Mr. Marsh says that there are good reasons why the cost should be defrayed out of tramway revenue—a practice now quite common—as it does not then involve an application to the Ministry of Transport for a loan.

To give a 12-minute service to and from the Seven Dials would take two buses, and a 15-minute service from Moulsecoomb to Preston would also take two buses, which, together with a spare, would make five vehicles ; the type briefly described costs about £1,200 per bus. In Mr. Marsh's opinion there is undoubtedly a demand for the two services mentioned, and, in his view, they should be instituted without delay. The corporation, however, apparently thinks otherwise, for, as we have said, the proposal has been rejected.