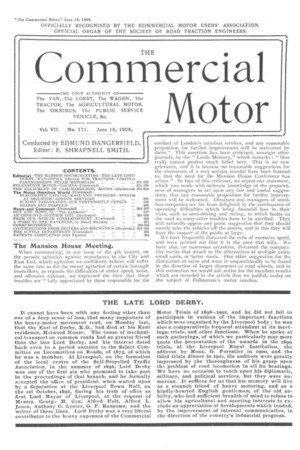 Page 1, 18th June 1908 — THE LATE LORD DERBY.
Close
Noticed an error?
If you've noticed an error in this article please click here to report it so we can fix it.
Keywords : Cities In England, Liverpool, Derby, Forestier

It cannot have been with any feeling other than one of a deep sense of loss, that many supporters of the heavy-motor movement read, on Monday last, that the Earl of Derby, K.G., had died at his Kent residence, Holwood House. The cause of mechanical transport on common roads had no greater friend than the late Lord Derby, and his interest dated back even to a period anterior to the Select Committee on Locomotives on Roads, of /873, of which he was a member. At Liverpool, on the formation of the local centre of the Self-Propelled Traffic Association, in the summer of 1896, Lord Derby -was one of the first six who promised to take part in the proceedings of that branch, and he formally accepted the office of president, when waited upon b7 a deputation at the Liverpool Town Hall, on the rst October, 1896, during his term of office as first Lord Mayor of Liverpool, at the request of Messrs. Georga H, Cox, Alfred Holt, Alfred L, Jones, Anthony G. Lyster, G. F. Ransome, and the writer of these lines. Lord Derby was a very liberal contributor to the heavy expenses of the Commercial Motor Trials of 1898-1901, and he did not fail to participate in various of the important functions which were organised by the Liverpool body ; he was also a comparatively frequent attendant at its meetings, trials, and other functions. When he spoke at such gatherings, of which we particularly may more quote the presentation of the awards in the /899 trials, at the Liverpool Royal Institution, the address by Mons. G. Forestier in 19oo, and the third trials dinner in i9o/, his auditors were greatly impressed by the thoroughness of his grasp upon the problem of road locomotion in all its bearings. We have no occasion to touch upon his diplomatic, military, and political services, but they were numerous. It suffices for us that his memory will live as a staunch friend of heavy motoring, and as a kindly-hearted English gentleman, of the old nobility, who had sufficient breadth of mind to refuse to allow his agricultural and sporting interests to exclude an appreciation of developments which tended, by the improvement of internal communication, in the direction of the country's industrial progress.