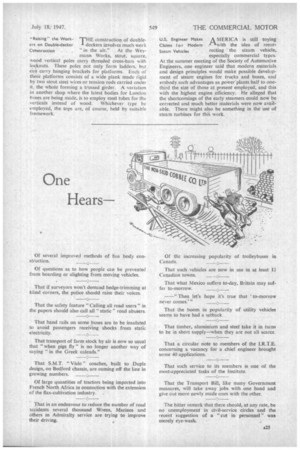 Page 27, 18th July 1947 — One
Close
Noticed an error?
If you've noticed an error in this article please click here to report it so we can fix it.

Of questions as to how people can be prevented from boarding or alighting from moving vehicles.

That if surveyors won't demand hedge-trimming at blind corners, the police should raise their voices.

That the safety feature "Calling all road users" in the papers should also call all " static " road abusers.

That hand rails on some buses are to be insulated to avoid passengers receiving shocks from static electricity.

That transport of farm stock by air is now so usual that "when pigs fly,' is no longer another way of saying "in the Greek calends."

That S.M.T. " Vislo " coaches, built to Duple design, on Bedford chassis, are coming off the line in growing numbers.

Of large quantities of tractors being imported into French North Africa in connection with the extension of the flax-cultivation industry. .

That in an endeavour to reduce the number of road accidents several thousand Wrens, Marines and others in Admiralty service are trying to improve their driving. Of the increasing popularity of trolleybuses in Canada.

That such vehicles are now in use in at least 13 Canadian towns.

That what Mexico suffers to-day, Britain may suffer to-morrow.

That the boom in popularity d utility vehicles seems to have had a setback.

• That timber, aluminium and steel take it in turns to be in short supply—when they are not all scarce.

That a circular note to members of the I.R.T.E. concerning a vacancy for a chief engineer brought some 40 applications.

That such service to its members is one of the most-appreciated tasks of the Institute.

That the Transport Bill, like many Government measures, will take away jobs with one hand and give Out more newly made ones with the other.

The bitter remark that there should, at any rate, be no unemployment in civil-service circles and the recent suggestion of a "cut in personnel". was merely eye-wash.