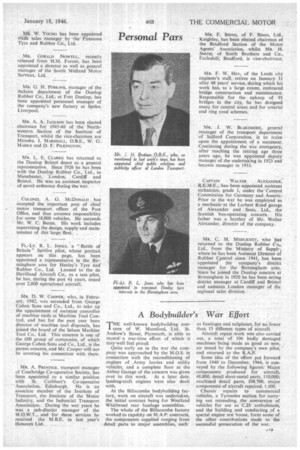 Page 21, 18th January 1946 — A Bodybuilder's War Effort
Close
Noticed an error?
If you've noticed an error in this article please click here to report it so we can fix it.

THE well-known bodybuilding concern of W. Mumford, Ltd.. St. Andrew's Street, Plymouth, is able to record a war-time effort of which it may,well feel proud.

Quite early on in the war the cornpany was approached by the M.O.S. in connection with the reconditioning of engines of Army lorries and utility vehicles, and a complete floor at the Abbey Garage of the concern was given over to this work. At a later date. landing-craft engines were also dealt with.

At the Billacombe bodybuilding factory, work on aircraft was undertaken, the initial contract being for Westland Whirlwind rear fuselage assemblies.

The whole of the Billacombe factory worked to capatity on M.A.P. contracts, the components supplied ranging from detail parts to major assemblies, such as fuselage § and tailplanes, fot no fewer than 15 different types of aircraft.

Aircraft repair work was also carried out, a total of 104 badly damaged machines being made as good as new, air tested by the company's own pilot, and returned to the R.A.F.

Chassis repairs to commercial vehicles, a Tyresotes section for carrying out retreading, the conversion of vehicles for use as C.D. ambulances, and the building and conducting of a special engine test house, form some of the other contributions made to the successful prosecution of the war.