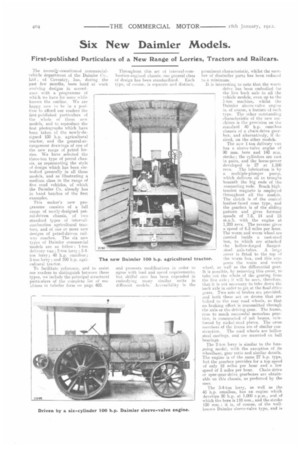 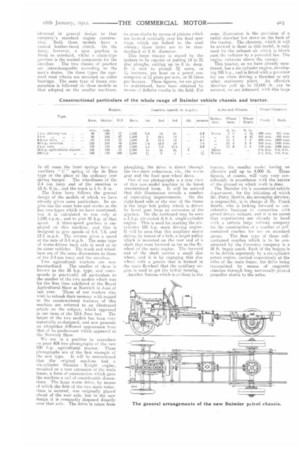 First-published Particulars of a New Range of Lorries, Tractors and Railcars.

The recently-constituted commercialvehicle department of the Daimler Co.. Ltd , of Coventry, has, during the past few months, been hard at work evolving designs in accord

all(P with a programme et which we have for some W hile known the outline. We are happy now to be in a position to afford our readers the first publishedparticulars if the whole of these new models, and to reproduce the first photographs which have been taken of the newly-designed 100 h.p. agricultural tractor, and the general-arrangement drawings of one of the new range of petrol lorries. We have selected the three-ton type of petrol chits

as representing the style ef design which has been embodied generally in all these models, and as illustrating a medium class in the range of five road vehicles, of which. the Daimler Co. already has in hand batches of the first examples.

To facilitate reference, and to assist our readers to distinguish between these types, we include the principal structural particulars of the complete list of machines in tabular form on page 405.

Throughout this set of internal-combustion-engined chassis, one general class of design has been standardized. Each type, of course, is separate and distinct.,

and presents modifications ia order to agree with load and speed requirements, but. skilful care has been expended in embodying many similar units in different models. Accessibility is the prominent characteristic, whilst the number of dissimilar parts has been reduced to a minimum.

It is interesting to note that the worm drive has been embodied for the live back axle in all the vehicle models, even up to the 5-ton machine, whilst the Daimler sleeve-valve engine is, of course, a feature of each type. The other outstanding characteristic of the new machines is the provision on the stahdard 40 h.p. omnibus chassis of a chain-drive gearbox, and alternatively, if desired, on the other models.

revs. The lubrication is by a multiple-plunger pump. which delivers oil to troughs beneath the big ends of the connecting rods. Bosch hightension magneto is employed throughout all the models. The clutch is of the conical leather-faced cone type, and the gearbox is of the sliding pattern and gives forward speeds of 7.8, 14 and 25 m.p.h. with the engine at 1,200 revs. The reverse gives a speed of 6.3 miles per hour. The worm and worm wheel are carried inside a cast-steel box, to which are attached the hollow-forged flanged steelaxle-tubes. A large cover is fitted to the top oi

actor, the worm box, and this sop ports the worm aed worm wheel, as well as the differential gear. It is possible, by removing this cover, to take out the whole of the gearing from the live axle ; it will be seen, therefore, that it is not necessary to take down the back axle in order to get at the final-drive gears. Two sets of brakes are provided, and both these act on drums that are bolted to the rear road wheels, so that no braking effort is transmitted through the axle ur the driving gear. The frame, true to much successful motorbus practice, is constructed of ash beams, reinforced by nickel steel plates. The cross members of the frame are of similar construction. The road wheels are hollow steel castings, and are mounted on ball bearings.

The 2-ton lorry is similar to the foregoing model, with the exception of. its wheelbase, gear ratio and similar details. The engine is of the same 27 hp. type, hut the gearbox provides for a top speed of only 18 miles per hour and a low speed of 5 miles per hour. Chain-drive or spur-gear-drive gearboxes are obtainable on this chassis, as preferred by the user.

The 3-4-ton lorry, as well as the 40 h.p. omnibus, has an engine which develops 50 h.p. at 1,000 r.p.m., and of which the bore is 110 mm., and the stroke 150 mm. ; it is, of course, of the wellknown Daimler sleeve-valve type, and is identical in general design to that company's standard eugine construction. Both these models have a conical leather-faced clutch. On the limey, however, a spur gearbox is fitted as staedard, whilst a chain-type gearbox is the reamai component for the omnibus. The two classes of gearbox are interchangeable according to the user's desire. On these types the caststeel road wheels are mounted on roller bearings. The same type of frame construction is followed on these models as that adopted on the smaller machines.

In all cases the front springs ha \ e an auxiliary " C " spring of the de Dims type in the place of the ordinary rear spring hanger. The wheelbases of the 3-4 ton lorry and of the omnibus is 13 ft. 0 in., and the track is 5 ft. 8 in.

The 5-ton lorry follows the general design of the Models of which we have already given some particulars. Its engine has the same bore and stroke as the last two types which we have mentioned, but it is calculated to run uely at 1,000 r.p.m., and to give 40 lep. at that

speed. A three-speed gearbox is employed on this machine, and this is designed to give speeds of 4.4, 7.8, and 13.5 m.p.h. The reverse gives a speed at the rate of 3.4 m.p.h. 'Me same type of worm-driven back axle is used as on its sister vehicles. The track and wheelbase are of the same dimensions as those of the 3-4-ton burry and the omnibus.

Two agricultural tractors are now standardized. The smaller of these is known as the 36 h.p. type, mid corresponds in practically all particulars to the smaller of the two models which was fur the first time exhibited at the Royal Agricultural Show at Norwich in June of last year. Those of our readers who wish to refresh their memory with regard to the constructional feat urea of this machine are referred to an illustrated article on the subject, which appeared in our issue of the 15th .Tnise last. The larger of the two models has been very materially re-designed, and now presents an altogether different appearance from that of its predecessor which appeared at the Norwich Show.

We are in a position to reproduce on pace 404 two photographs of the new 100 lei), agricultural tractor. These photographs are of the first example of the new type. It will be remembered that the original machine had a six-cylinder Daimler Knight engine, mounted on a rear extension of the main frame, a form of construction which gave the machine a tail of considerable dimensions. The large worm drive, by means of which the first of the two main reductions is secured, was originally placed ahead of the rear axle, but in the new design it is compactly disposed directly over that axle. The drive is taken from

its eiees shafts by means of pinioes which are located vertically over the final spur rings which are bolted to the road wheels ; these latter are to be standardized at 8 ft, diameter.

This large tractor is stated by the makers to he capable of pulling 14 to 21 disc ploughs, cutting up to 8 in. deep. It is said to plough 3gacres, or hectares, per hour on a petrol consumption of 11 pints per acre, or 16 litres per hectare. These figures, we are given to understand, have been obtained by means of definite results in the field. For ploughing, the drive is direct through. the two main reductions, viz., the worm gear and the final spur-wheel drive.

One of our photographs is a rear view of this new-model machine in its latest standardized form. It will be noticed that this illustration reveals a number of interisting improvements. On the right-hand side of the rear of the frame is the large belt pulley which is driven by bevel gear from an extension of the gearbox. On the footboard may be seen a 3 h.p. air-cooled B.S.A. single-cylinder engine. This is used for starting the sixcylinder 100 h.p. main driving engine. it will be seen that this auxiliary motor drives, by means of a belt, a larger pulley which is mounted on the rear end of a shaft that runs forward as far as the flywheel of the main engine. The forward end of the shaft carries a small disc wheel, and it is by engaging this disc wheel with a groove that is formed in the main flywheel that the auxiliary engine is used to get the initial turning.

Another feature which is evident in the same illusttation is the provision of a radial drawbar low down on the back of the tractor. The chimney, which it will be noticed is abort in this model, is only used for the exhaust air which is blown past the radiator by a powerful fan. The engine exhausts above the canopy.

This tractor, as we have already mentioned, has a six-cylinder engine, developing 100 h.p., and is fitted with a governor for use when driving a thresher or any other stationary plant. An effective drawbar mill up to 12,000 lb. can be secured, we are informed, with this large tractor, the smaller niudel having an effective pull up to 4.000 lb. These figines, of course, will vary very considerably in accordance with the nature of the emend on which work is done'.

The Daimler Co.'s commercial-vehicie department, for the initiation of which )Jr. Percy Martin, the managing director, is responsible, is in charge of Mr. Frank. Searle, who is looking forward to coneiders hle busiiit's ill emmection with petrol-driven railcars, and it is no secret that neentiations are already in hand with a certain large railway company for the construction of a number of sell contained coaches for use on standard

gauge. The first type of these selfcontained coaches which is to he constructed by the Coventry company is a 56 ft. bogey coach. Rad) of the bogeys is to be driven separately by a six-cylinder petrol engiue, carried respectively at the sides of the main frame, the drive being transmitted by means of magnetic clutches through long universally-jointed propeller shafts to the axles.