The Tribunal on Changes of Base 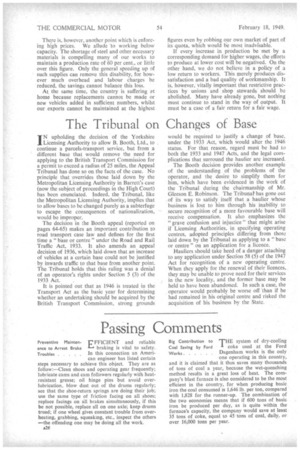 Page 2, 18th February 1949 — The Tribunal on Changes of Base
Close
Noticed an error?
If you've noticed an error in this article please click here to report it so we can fix it.
Keywords : Tribunal, Australian Courts, Law, Arbitration, Government, Law / Crime

IN upholding the decision of the Yorkshire Licensing Authority to allow B. Booth, Ltd., to continue a parcels-transport service, but from a different base that would remove the need for applying to the British Transport Commission for a permit to exceed a radius of 25 miles, the Appeal Tribunal has done so on the facts of the case. No principle that -overrides those laid down by the Metropolitan Licensing Authority in Barrett's case (now the subject of proceedings in the High Court) has been enunciated. Indeed, the Tribunal, like the Metropolitan Licensing Authority, implies that to allow bases to be changed purely as a subterfuge to escape the consequences of nationalization, would be improper.

The decision in the Booth appeal (reported on pages 64-65) makes an important contribution to road transport case law and defines for the first time a "base or centre" under the Road and Rail Traffic Act, 1933. It also amends an appeal decision of 1936, which laid down that an increase of vehicles at a certain base could not be justified by inwards traffic to that base from another point. The Tribunal holds that this ruling was a denial of an operator's rights under Section 5 (3) of the 1933 Act.

It is pointed out that as 1946 is treated in the Transport Act as the basic year for determining whether an undertaking should be acquired by the British Transport Commission, strong grounds would be required to justify a change of base, under the 1933 Act, which would alter the 1946 status. For that reason, regard must be had to both the 1933 and 1947 Acts, and the legal complications that surround the haulier are increased.

The Booth decision provides another example of the understanding of the problems of the operator, and the desire to simplify them for him, which have been evidenced in the work of the Tribunal during the chairmanship of Mr. Gleeson E. Robinson. The Tribunal has gone out .of its way to satisfy itself that a haulier whose business is lost to him through his inability to secure recognition of a more favourable base will receive compensation. It also emphasizes the "grave confusion and injustice" that might arise if Licensing Authorities, in specifying operating centres, adopted principles differing from those laid down by the Tribunal as applying to a "base or centre" on an application for a licence.

Hauliers should take heed of a danger attaching to any application under Section 58(5) of the 1947 Act for recognition of a new operating centre. When they apply for the renewal of their licences, _ they may be unable to prove need for their services in the new locality, and the former base may be held to have been abandoned. In such a case, the operator would probably be worse off than if he had remained in his original centre and risked the acquisition of his business by the State.