A good all-rounder, this tentonner has better than average payload 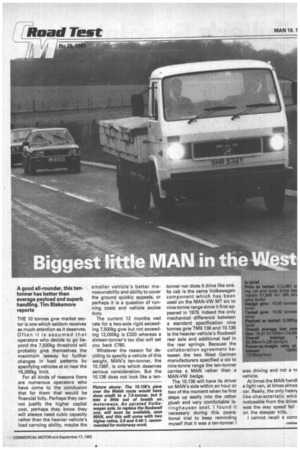 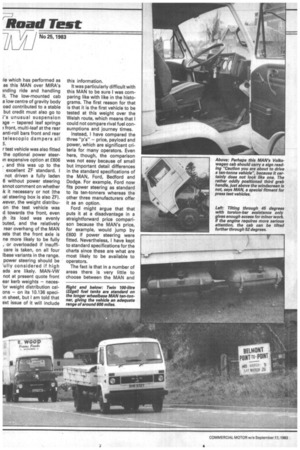 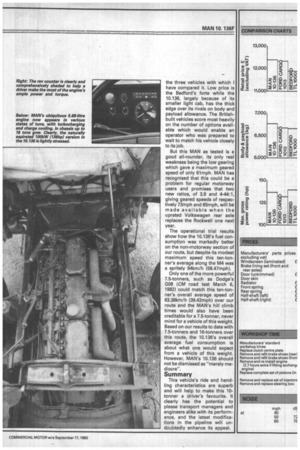 Page 47, 17th September 1983 — A good all-rounder, this tentonner has better than average payload
Close
Noticed an error?
If you've noticed an error in this article please click here to report it so we can fix it.
Keywords : Suspension

and superb handling. Tim Blakemore reports THE 10 tonnes gvw market sector is one which seldom receives as much attention as it deserves. Often it is assumed that operators who decide to go beyond the 7,500kg threshold will probably give themselves the maximum leeway for further changes in load patterns by specifying vehicles at or near the 16,260kg limit.

For all kinds of reasons there are numerous operators who have come to the conclusion that for them that would be financial folly. Perhaps they cannot justify the higher capital cost, perhaps they know they will always need cubic capacity rather than the heavier vehicle's load carrying ability, maybe the smaller vehicle's better manoeuvrability and ability to cover the ground quickly appeals, or perhaps it is a question of running costs and vehicle excise duty.

Whatever the reason for deciding to specify a vehicle of this weight, MAN's ten-tonner, the 10.136F, is one which deserves serious consideration. But the 10.136 does not look like a ten ton nor nor does it drive like one. Its cab is the same Volkswagen component which has been used on the MAN-VW MT six to nine-tonne range since it first appeared in 1979. Indeed the only mechanical difference between a standard specification nine tonnes gvw TM9 136 and 10.136 is the heavier vehicle's Rockwell rear axle and additional leaf in the rear springs. Because the collaboration agreement between the two West German manufacturers specified a six to nine-tonne range the ten-tonner carries a MAN rather than a MAN-VW badge.

The 10.136 will have its driver on MAN's side within an hour or two of the moment when he first steps up easily into the rather plush and very comfortable Isringhausen seat. I found it necessary during this operational trial to keep reminding myself that it was a ten-tonner I was driving and not a nc vehicle.

At times the MAN handl a light van, at times almos car. Really, the only heavy like-characteristic whic noticeable from the driver was the way speed fell on the steeper hills.

I cannot recall a comr

:le which has performed as as this MAN over MIRA's Inding ride and handling it. The low-mounted cab a low centre of gravity body oad contributed to a stable but credit must also go to l's unusual suspension 3ge — tapered leaf springs 3 front, multi-leaf at the rear anti-roll bars front and rear telescopic dampers all J.

r test vehicle was also fitted the optional power steerin expensive option at £606 , and this was up to the excellent ZF standard. I not driven a fully laden 6 without power steering 3nnot comment on whether ik it necessary or not (the 'al steering box is also ZF). Never, the weight distribuon the test vehicle was d towards the front, even jh its load was evenly buted, and the relatively rear overhang of the MAN 3sts that the front axle is no more likely to be fully , or overloaded if insufficare is taken, on all four lbase variants in the range. power steering should be 'ully considered if high ads are likely. MAN-VW not at present quote front ear kerb weights — neces'or weight distribution calons — on its 10.136 speck )n sheet, but I am told that axt issue of it will include this information.

It was particularly difficult with this MAN to be sure I was comparing like with like in the histograms. The first reason for that is that it is the first vehicle to be tested at this weight over the Welsh route, which means that I could not compare rival fuel consumptions and journey times.

Instead, I have compared the three "p's" — price, payload and power, which are significant criteria for many operators. Even here, though, the comparison was not easy because of small but important detail differences in the standard specifications of the MAN, Ford, Bedford and Dodge. For example, Ford now fits power steering as standard to its ten-tonners whereas the other three manufacturers offer it as an option.

Ford night argue that that puts it at a disadvantage in a straightforward price comparison because the MAN's price, for example, would jump by £600 if power steering were fitted. Nevertheless, I have kept to standard specifications for the charts since these are what are most likely to be available to operators.

The fact is that in a number of areas there is very little to choose between the MAN and the three vehicles with which I have compared it. Low price is the Bedford's forte while the 10.136, largely because of its smaller light cab, has the thick edge over its rivals on body and payload allowance. The Britishbuilt vehicles score most heavily on the number of options available which would enable an operator who was prepared to wait to match his vehicle closely to its job.

But this MAN as tested is a good all-rounder, its only real weakness being the low gearing which gave a maximum geared speed of only 61mph. MAN has recognised that this could be a problem for regular motorway users and promises that two new ratios, of 3.9 and 4-44:1, giving geared speeds of respectively 73mph and 65mph, will be made available when the uprated Volkswagen rear axle replaces the Rockwell one next year.

The operational trial results show how the 10.136's fuel consumption was markedly better on the non-motorway section of our route, but despite its modest maximum speed this ten-tonner's average along the M4 was a spritely 94km/h (58.47mph).

Only one of the more powerful 7.5-tonners, such as Dodge's GOB (CM road test March 6, 1982) could match this ten-tonner's overall average speed of 63.38km/h (39.42mph) over our route and the MAN's hill climb times would also have been creditable for a 7.5-tonner, never mind for a vehicle of this weight. Based on our results to date with 7.5-tonners and 16-tonners over this route, the 10.136's overall average fuel consumption is about what one would expect from a vehicle of this weight. However, MAN's 10.136 should not be dismissed as "merely mediocre".

This vehicle's ride and handling characteristics are superb and will help to make this 10tonner a driver's favourite. It clearly has the potential to please transport managers and engineers alike with its performance, and the latest modifications in the pipeline will undoubtedly enhance its appeal.