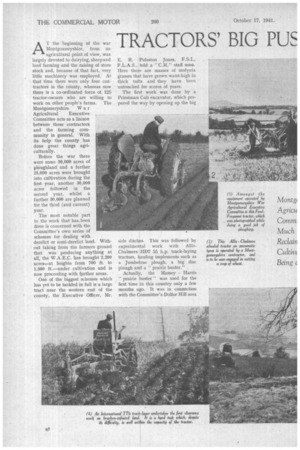 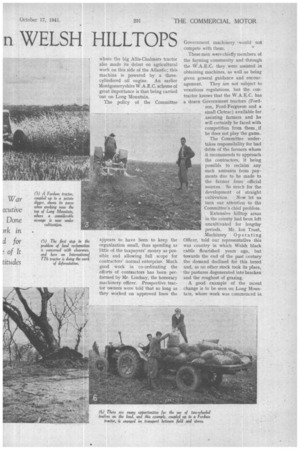 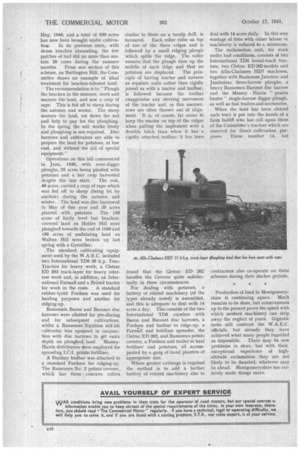 T the beginning of the war Montgomeryshire, from an agricultural point of view, was largely devoted to dairying, sheep and beef farming and the raising of store stock and, because of that fact, very little machinery was employed. At that time there were only four contractors in the county, whereas now there is a co-ordinated force of 125 tractor-owners who are willing to work on other people's farms. The Montgomeryshire W a r Agricultural Executive Committee acts as a liaison between these contractors and the farming community in general. • With its help the county has done great things agriculturally.

Before the war there were some 30,000 acres of ploughland and a further 25,000 acres were brought into cultivation during the first year, another 30,000 acres followed in the second year, whilst a further 30,000 are planned for the third (and current) year.

The most notable part in the work that has-been done is concerned with the Committee's own series of schemes for dealing with derelict or semi-derelict land. Without taking from the farmers ground that was producing anything at all, the W.A.E.C. has brought 2,200 acres---at heights from 700 ft. to 1,500 ft.—under cultivation and is now proceeding with further areas.

One of the biggest schemes which has yet to be tackled in full is a large tract near the western end of the county, the Executive Officer, Mr.

E. R. Puleston Jones, F.S.I., F.L.A.S., told a "C.M." staff man. Here there are masses of molynia grasses that have grown waist-high in thick tufts and they have been untouched for scores of years.

The first work was done by a Priestman Cub excavator, which prepared the way by opening up the big

side ditches. This was followed by experimental work with AllisChalmers HD7 55 h.p. track-laying tractors, hauling implements such as a Jurnbotrac plough, a big" disc plough and a " prairie buster."

Actually, the Massey Harris " prairie buster" was used for the first time in this country only a few months ago. It was in connection with the Committee's Dolfor Hill area where the big Allis-Chalmers tractor also made its debut on agricultural work on this side of the Atlantic; this machine is powered by a threecylindered oil engine. An earlier Montgomeryshire W.A.E.C. scheme of great importance is that being carried out on Long Mountain.

The policy of the Committee appears to have been to keep the organization small, thus spending as little of the taxpayers' money as possible and allowing full scope for contractors' normal enterprise. Much good work in co-ordinating the efforts of conboactors has been performed by Mr. Lindsay, the honora,ry machinery officer. Prospective tractor owners were told that so long as they worked on approved lines the Government machinery .would not compete with them.

• These men were chiefly members of the farming community and through the W.A.E.C. they were assisted in obtaining machines, as well as being given general guidance and encouragement. They are not subject to vexatious regulations, but the contractor knows that the W.A.E.C. has a dozen Government tractors (Fordson, Ford-Ferguson and a small Cletrac) available for assisting farmers and he will certainly be faced with competition from them if he does not play the game.

The Committee undertakes responsibility for bad debts of the farmers whom it recommends to approach the contractors, it being possible to reclaim any such amounts from payments due to be made to the farmer from official sources. So much for the development • of straight cultivation. Now let us turn our attention to the Committee's chief problem.

Extensive hilltop areas in the county had been left uncultivated for lengthy periods. Mr. Ion Trant, Machinery Operating Officer, told our representative this was country in which Welsh black cattle flourished years ago, but towards the end of the past century the demand declined for this breed and, as no other stock took its place, the pastures degenerated intobracken and the roughest of grazing.

A good example of the recent change is to be seen on Long Mountain, where work was commenced in May, 1940, and a total of 500 acres has now been brought under cultiva tion. In its previous state, with dense bracken abounding, the few patches of turf did no more than sustain 20 cows during the summer months. From one section of this scheme, on Buttington Hill, the Committee draws an example of ideal treatment for bracken-infested land.

The recommendation is to " Plough the bracken in the summer, work and manure the-land, and sow a crop of rape. This is fed of to sheep during the autumn and winter. The sheep manure the land, rot down the sod and help to pay for the ploughing. In the spring the soil works freely and ploughing is not required. Disc harrows and cultivators are able to prepare the land for potatoes, at low cost, and without the aid of special equipment."

Operations on this hill commenced in June, 1940, with semi-digger ploughs, 25 acres being planted with potatoes and a fair crop harvested despite the late start. The rest, 40 acres, carried a crop of rape which was fed off to sheep (being let by auction) during the autumn and winter. The land was disc harrowed in May of this year and 35 acres planted With potatoes. The 150 acres of fairly level but brackencovered land on Heldre Hill were ploughed towards the end of 1940 and 130 acres of undulating land on Walton Hill were broken up last spring with a Gyrotiller. •

, The standard cultivating equipment used by the W.A.E.C. included two International TD6 30 h.p. TracTractors for heavy work, a Cletrac ED 262 track-layer for heavy interrow work and, in addition, an International Farmall and a Bristol tractor for work in the rows. A standard rubber-tyred Fordson was used for hauling purposes and .artother for ridging-up.

Ransonaes Baron and Baronet disc harrows were allotted for pre-discing and for subsequent cultivations, whilst a Ransotnes Equitine self-lilt cultivator was operated in conjunction with disc harrows to get extra depth on ploughed land. MasseyHarris distributors were employed for spreading I.C1. potato fertilizer.

A Stanhay toolbar was attached to a standard Fordson for ridging-up. The Ransomes No. 2 potato coverer. which has three concave rollers similar to those on a turnip drill, is favoured. Each roller rides on top of one of the three ridges and is followed by a small ridging plough which splits the ridge. The roller ensures that the plough runs up the middle of each ridge and that no

potatoes are displaced. The principle of having tractor and coverer as separate units rather than rigidly joined as with a tractor and toolbar, is followed because the toolbar exaggerates any steering movement of the tractor and, in this Manner, rows are often thrown out' of alignment. It is, of course, far easier to keep the tractor on top of the ridges when pulling the implement with a flexible hitch than when it has a rigidly attached toolbar; it has been

found that the Gletrac ED 262 handles the Coverer quite satisfactorily in these circumstances.

For 'dealing with potatoes, a battery of related machinery (of the types already noted) is assembled, and this is adequate to deal with 14 acres a day. This consists of the two International TD6 crawlers with Baron and Baronet disc harrows, a Fordson and toolbar to ridge-up, a Farman and fertilizer spreader, the Cletrac ED 262, and Ransoms potato coverer, a Fordson and trailer to haul fertilizer and potatoes; all accompanied by a gang of hand planters of appropriate size.

Where greater coverage is required the method is to add a further battery of related machinery also to deal with 14 acres daily. In this way wastage of time with either labour of machinery is reduced to a minimum.

When the land has been cleared each tract is put into the hands of a farm bailiff who has call upon those of the Committee's tractors which are reserved for direct cultivation purposes. These number 14, but Production of food in Montgomeryshire is continuing apace. Much remains to be done, but achievements up to the present prove the speed with which modern machinery can strip away the neglect of years. Gigantic tasks still confront the W.A.E.C. officials, but already they have achieved what many people regarded as impossible. There may be new problems in store, but with their exceptional experience of highaltitude reclamation they are not likely to be daunted, whatever may lie ahead. Montgomeryshire has certainly made things moye.