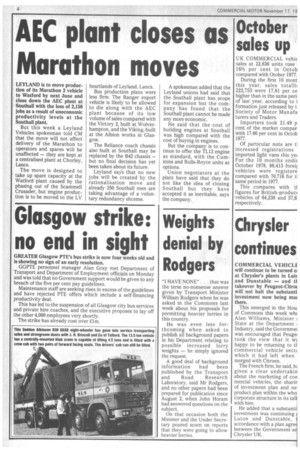 Page 6, 17th November 1978 — AEC plant closes as Marathon moves
Close
Noticed an error?
If you've noticed an error in this article please click here to report it so we can fix it.

LEYLAND is to move production of its Marathon 2 vehicle to Watford by next June and close down the AEC plant at Southall with the loss of 2,150 jobs as a result of uneconomic productivity levels at the Southall plant.

But this week a Leyland Vehicles spokesman told CM that the move will not affect delivery of the Marathon to operators and spares will be unaffected — they are kept at a centralised plant at Chorley, Lancs.

The move is designed to take up spare capacity at the Watford plant caused by the phasing out of the Scammell Crusader, but engine production is to be moved to the LV heartlands of Leyland, Lancs.

Bus production plans were less firm. The Ranger export vehicle is likely to be allowed to die along with the AEC plant because of its low volume of sales compared with the Victory 2, built at Wolverhampton, and the Viking, built at the Albion works in Glasgow.

The Reliance coach chassis also built at Southall may be replaced by the B42 chassis — but no final decision has yet been taken about its future.

But the company is to continue to offer the TL12 engine as standard, with the Cummins and Rolls-Royce units as options.

Union negotiators at the plant have said that they do not like the idea of closing Southall but they have accepted it as inevitable, says the company.