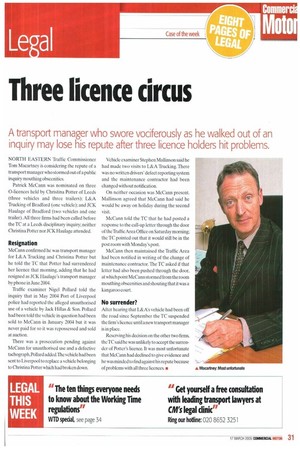 Page 31, 17th March 2005 — Three licence circus
Close
Noticed an error?
If you've noticed an error in this article please click here to report it so we can fix it.
Keywords : Truck

A transport manager who swore vociferously as he walked out of an inquiry may lose his repute after three licence holders hit problems.

NORTH EASTERN Traffic Commissioner Tom Macartney is considering the repute of a transport manager who stormed out of a public inquiry mouthing obscenities.

Patrick McCann was nominated on three 0-licences held by Christina Potter of Leeds (three vehicles and three trailers); L&A Trucking of Bradford (one vehicle); and JCK Haulage of Bradford (two vehicles and one trailer). All three firms had been called before the TC at a Leeds disciplinary inquiry; neither Christina Potter nor JCK Haulage attended.

McCann confirmed he was transport manager for L&A Trucking and Christina Potter but he told the TC that Potter had surrendered her licence that morning, adding that he had resigned as JCK Haulage's transport manager by phone in June 2004.

Traffic examiner Nigel Pollard told the inquiry that in May 2004 Port of Liverpool police had reported the alleged unauthorised use of a vehicle by Jack Hillas & Son. Pollard had been told the vehicle in question had been sold to McCann in January 2004 but it was never paid for so it was repossessed and sold at auction.

There was a prosecution pending against McCann for unauthorised use and a defective tachograph, Pollard added.The vehicle had been sent to Liverpool to replace a vehicle belonging to Christina Potter which had broken down. Vehicle examiner Stephen MaHinson said he had made two visits to L&A Trucking. There was no written drivers' defect reporting system and the maintenance contractor had been changed without notification.

On neither occasion was McCann present. Mallinson agreed that McCann had said he would be away on holiday during the second visit.

McCann told the TC that he had posted a response to the call-up letter through the door of the Traffic Area Office on Saturday morning; the TC pointed out that it would still be in the post room with Monday's post.

McCann then maintained the Traffic Area had been notified in writing of the change of maintenance contractor. The TC asked if that letter had also been pushed through the door. at which point McCann stormed from the room mouthing obscenities and shouting that it was a kangaroo court.

Alter hearing that L&A's vehicle had been off the road since September the TC suspended the firm's licence until a new transport manager is in place.

Reserving his decision on the other two firms, the TC said he was unlikely to accept the surrender of Potter's licence. It was most unfortunate that McCann had declined to give evidence and he was minded to find against his repute because of problems with all three licences. •