Piccadilly to get its bus lane 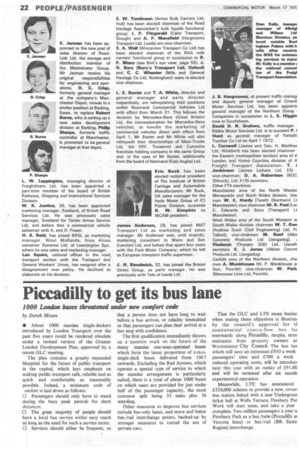 by Derek Moses • About 1000 standee single-deckers introduced by London Transport over the past five years could be rendered obsolete under a revised version of the Greater London Development Plan, approved by a recent GLC meeting.

The plan contains a greatly expanded blueprint for the future of public transport in the capital, which lays emphasis on making public transport safe, reliable and as quick and comfortable as reasonably possible. Indeed, a minimum code of om fort is laid down as follows: LI Passengers should only have to stand during the busy peak periods for short distances.

The great majority of people should have a local bus service within easy reach so long as the need for such a service exists. ILI Services should either be frequent, so that a person does not have long to wait before a bus arrives, or reliably timetabled so that passengers can plan their arrival at a bus stop with confidence.

The first qualification immediately throws up a question mark on the future of the many standee one-man-operated buses which form the latest proportion of o.m.o. single-deck buses delivered from 1967 onwards. Excluding the Red Arrows, which operate a special type of service to which the standee arrangement is particularly suited, there is a total of about 1000 buses on which seats are provided for just under half of the passenger capacity, the most common split being 33 seats plus 34 standing.

Other measures to improve bus services include bus-only lanes, and more and better bus /rail interchange points, backed-up by stronger measures to curtail the use of private cars. That the GLC and LTE mean busine when stating these objectives is illustrati by the council's approval for LI controversial contra-flow bus 1 ar westwards along Piccadilly, despite, stror resistance from property owners ar Westminister City Council. The bus Ian which will save an estimated £950 a week passengers' time and £700 a week reduced operating costs, will be introduci later this year with an outlay of £91,00 and will be reviewed after six month experimental operation.