• "Ile Leyland Trucks name is back on the British 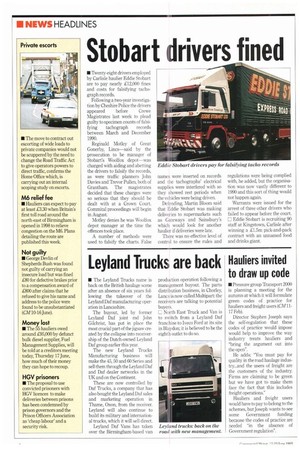 haulage scene after an absence of six years following the takeover of the Leyland Daf manufacturing operation in Lancashire.

The buyout, led by former Leyland Daf joint md John Gilchrist, has put in place the most crucial part of the jigsaw created by the collapse into receivership of the Dutch-owned Leyland Daf group earlier this year.

The new Leyland Trucks Manufacturing business will make the 4.5,50 and 60 Series and sell them through the Leyland Daf and Daf dealer networks in the UK and on the Continent.

These are now controlled by Daf Trucks, a company that has also bought the Leyland Daf sales and marketing operation in Thame, Oxon, from the receiver. Leyland will also continue to build its military and international trucks, which it will sell direct.

Leyland Daf Vans has taken over the Birmingham-based van production operation following a management buyout. The parts distribution business, in Chorley, Lanes is now called Multipart: the receivers are talking to potential buyers.

LI North East Truck and Van is to switch from a Leyland Daf franchise to Iveco Ford at its site in Blaydon; it is believed to be the eighth outlet to do so.