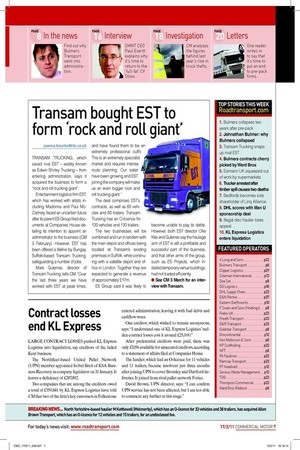 Page 6, 17th February 2011 — Transam bought EST to form ‘rock and roll giant’
Close
Noticed an error?
If you've noticed an error in this article please click here to report it so we can fix it.
Keywords : Truck Driver, Business / Finance

Entertainment logistics firm EST, which has worked with artists including Madonna and Paul McCartney, faced an uncertain future after its parent ES Group filed documents at Companies House detailing its intention to appoint an administrator to the business (CM 3 February). However, EST has been offered a lifeline by Bungay, Suffolk-based Transam Trucking, safeguarding a number of jobs.

Mark Guterres, director of Transam Trucking, tells CM: “Over the last three years we have worked with EST at peak times, and have found them to be an extremely professional outfit. This is an extremely specialist market and requires intense route planning. Our sales have been growing and EST joining the company will make us an even bigger rock and roll trucking giant.” The deal comprises EST’s contracts, as well as 60 vehicles and 60 trailers. Transam Trucking has an O-licence for 120 vehicles and 130 trailers.

The two businesses will be combined and run in tandem with the main depot and offices being located at Transam’s existing premises in Suffolk, while continuing with a satellite depot and office in London. Together they are expected to generate a revenue of approximately £17m.

ES Group said it was likely to become unable to pay its debts. However, both EST director Ollie Kite and Guterres say the haulage arm of EST is still a profitable and successful part of the business, and that other arms of the group, such as ES Projects, which installed temporary venue buildings, had not traded efficiently.

● See CM 3 March for an interview with Transam.