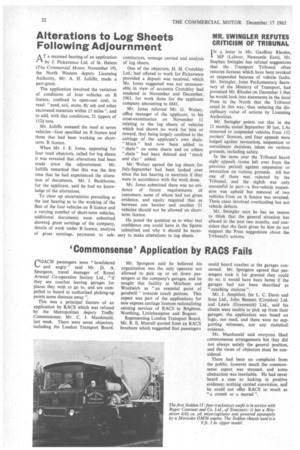 IN a letter to Mr. Geoffrey Rhodes, L MP (Labour, Newcastle East), Mr. Stephen Swingler has refuted suggestions that the . Transport Tribunal often restores licences which have been revoked or suspended because of vehicle faults. Mr. Swingler, Joint Parliamentary Secretary of the Ministry of Transport, had promised Mr. Rhodes oh December 1 that he would look into statements in the local Press in the North that the Tribunal acted in this way, thus reducing the disciplinary value of actions by Licensing Authorities.

Mr. Swingler points out that in the 12 months ended September 30 last, LAs removed or suspended vehicles from 132 carriers' licences, and four appeals were lodged against revocation, suspension or curtailment decisions taken on various grounds, including safety.

In the same year the Tribunal heard eight appeals (some left over from the previous period) against suspension or revocation on various grounds. All but one of these was rejected by the Tribunal, and the eighth was only successful in part—a five-vehicle suspension was upheld but removal of two vehicles from an A licence was reversed. These cases involved overloading but not vehicle defects.

Mr. Swingler says he has no reason to think that the general situation has altered in the oast two months, and considers that the facts given by him do not support the Press suggestions about the Tribunal's actions.