Not a Case for Contract A Licence 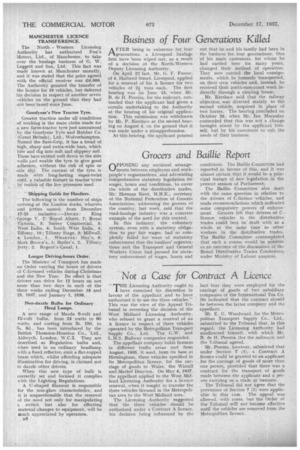 Page 8, 17th December 1937 — Not a Case for Contract A Licence
Close
Noticed an error?
If you've noticed an error in this article please click here to report it so we can fix it.
Keywords : Appeal, Appellate Review, Lawsuits, Legal Procedure, Drinking Culture, Business / Finance, Law / Crime

E Licensing Authority ought to I have exercised his discretion in favour of the appellant and to have authorized it to use the three vehicles." This was the view of the Appeal Tribunal in reversing the decision of the West Midland Licensing Authority, who refused to grant a renewal of an A licence in respect of three vehicles operated by the Metropolitan Transport Supply Co., Ltd. The G.W. and L.M.S. Railway companies responded. The appellant company holds licences in different traffic areas and from August, 1935, it used, from its base at Birmingham, three vehicles specified in its Metropolitan licence, for the carriage of goods to -Wales, the WirralI and Market Drayton. On May 4, 1937, the appellant applied to the West Midland Licensing Authority for a licence renewal, when it sought to transfer the three vehicles licensed in the Metropolitan area to the West Midland area.

The Licensing Authority suggested that the three vehicles should be authorized under a Contract A licence, his decision being influenced by the fact that they were employed for the carriage of goods of two subsidiary companies of the International Tea Co. He indicated' that the contract should be between the latter company and the appellant.

Mr. E. G. Woodward, for the Metropolitan Transport Supply Co., Ltd.. submitted to the Tribunal that, in this regard, the Licensing Authority had misdirected himself, with which Mr. B. de H. Pereira (for the railways) and the Tribunal agreed.

Mr. Pereira, however, submitted that under Section 7 (1), a Contract A licence could be granted to an applicant for the carriage of goods of more than one person, provided that there was a contract for the transport of goods made between the applicant and a person carrying on a trade or business.

The Tribunal did not agree that the provisions of Section 7 (1) were applicable in this case. The appeal was allowed, with costs, but the Order of the Tribunal will not become effective until the vehicles are removed from the Metropolitan licence.