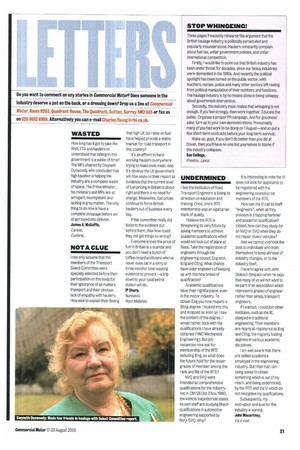 Page 23, 17th August 2000 — NOT A CLUE
Close
Noticed an error?
If you've noticed an error in this article please click here to report it so we can fix it.

I can only assume that the members of the Transport Select Committee were specially selected before their participation on this body for their ignorance of all matters transport and their obvious lack of empathy with hauliers. How else to explain their finding that high UK tax rates on fuel have helped provide a stable market for road transport in this country?

It's an affront to hardworking hauliers everywhere trying to make ends meet. And it's obvious the UK government will now seize on their report as evidence that the current level of fuel pricing in Britain is about right and there is no need for change. Meanwhile, fuel prices continue to force British hauliers out of business every day.

If this committee really did listen to the evidence put before them, then how could they still get things so wrong?

Everyone knows the price of fuel in Britain is a scandal and you don't need a bunch of toffee-nosed politicians who've never even sat in a lorry or three months' time-wasting evidence to prove it—a trip down to your local petrol station will do.