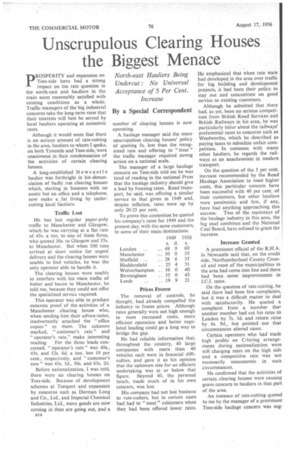 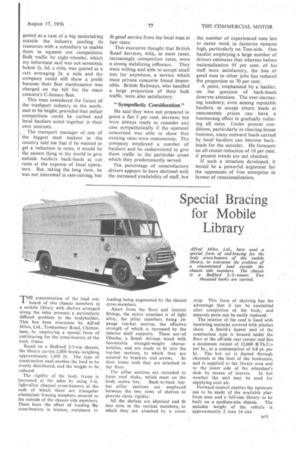 Page 48, 17th August 1956 — Unscrupulous Clearing Houses the Biggest Menace
Close
Noticed an error?
If you've noticed an error in this article please click here to report it so we can fix it.

North-east Hauliers Being Undercut : No Universal Acceptance of 5 Per Cent. Increase By a Special Correspondent

pROSPERITY and expansion on Tees-side have had a strong impact on the rate question in the north-east and hauliers in the main seem reasonably satisfied with existing conditions as a whole. Traffic managers of the big industrial concerns take the long-term view that their interests will best be served by local hauliers operating at economic rates.

Although it would seem that there is no serious amount of rate-cutting in the area, hauliers to whom I spoke, on both Tyneside and Tees-side, were unanimous in their condemnation of the activities of certain clearing houses.

A long-established Ne we a St 1 e haulier was forthright in his -denun • ciation of badly run clearing houses which, starting in business with no assets but an office and a telephone, now make a fat living by undercutting local hauliers.

Traffic Lost He has lost regular paper-pulp • traffic to Manchester and Glasgow, which he was carrying at a fiat rate of 45s, a ton, to one of these firms, who quoted 36s. to Glasgow and 35s. to Manchester. But when 100 tons arrived at short notice for urgent' delivery and the clearing houses were unable to find vehicles, he was the only operator able to handle it.

The clearing houses were unable to interfere with his main traffic of butter and bacon to Manchester, he told me, because they could not offer the speCialized service required.

This operator was able to produce concrete proof of the "activities of a Manchester clearing house who, when sending him their advice-notes, inadvertently attached the "office copies" to them. The columns marked, "customer's rate" and operator's rate," make interesting reading. For the three loads concerned, "operator's rate" was 40s., 45s. and 52s. 6d. a ton, less 10 per cent., respectively, and "customer's rate" was 45s. 3d., 50s. and 63s. 2d.

Before nationalization, I was told, there were no clearing houses on Tees-side. Because of development schemes at Teesport and expansion by Concerns such as Dorman Long and Co., Ltd., and Imperial Chemical Industries, Ltd., more goods are now coming in than are going out, and a number of clearing houses is now operating.

A haulage manager said the more unscrupulous clearing houses' policy of quoting 5s. less than the recognized rate and offering to " treat " the traffic manager required strong action on a national scale.

The manager of a large haulage concern on Tees-side told me he was tired of reading in the national Press that the haulage industry should give a lead by freezing rates. Road transport, he said, was offering a similar service to that given in 1949 and, despite inflation, rates were up by only 20-25 per cent.

To prove this contention he quoted his company's rates for 1949 and the present day, with the same customers, to some of their main destinations.

Prices Frozen The removal of controls, he thought, had already compelled the industry to freeze prices. Although rates generally were not high enough to meet increased costs, more efficient operation and better regulated loading could go a long way to bridge the gap.

He had reliable information that, throughout the country, 40 large companies with more than 40 vehicles each were in financial difficulties, and gave it as his opinion that the optimum size for an efficient undertaking was at or below that figure. Beyond 40, the personal touch, made much of in his own concern, was lost.

His company had not lost business to rate-cutters, but in certain cases had had to " meet " customers when they had been offered lower rates. He emphasized that when rate wars had developed in the area over traffic for big building and development projects, it had been their policy to stay out and concentrate on good service to existing customers.

Although he admitted that there had, as yet, been no serious competition from British Road Services and British Railways in his area, he was particularly bitter about the railways' preferential rates to concerns such as Woolworths, which he described as paying taxes to subsidize unfair competition. In common with many other hauliers, he regards the railways as an anachronism in modern transport.

On the question of the 5 per cent. increase recommended by the Road Haulage Association to meet higher costs, this particular concern have been successful with 40 per cent. of. their customers, but other hauliers were pessimistic and few, if any, have had anything approaching this success. Two of the mainstays of the haulage industry in this area, the big steel combines and the National Coal Board, have refused to grant the increase.

Increase Granted A prominent official of the R.H.A. in Newcastle said that, on the credit side, Northumberland County Council and most of the municipalities in the area had come into line and there had been some improvements in rates.

On the question of rate-cutting, he saiki there had been few complaints, but it was a difficult matter to deal with satisfactorily. He quoted a complaint from a member that another member had cut his rates to London_ by 7s. 3d. and return rates by 6s. 9d., but pointed out that circumstances altered cases.

Certain operators who had made high profits on C-hiring arrangements during nationalization were still charging rates on the high side and a competitive rate was not necessarily uneconomic in such circumstances.

He confirmed that the activities of certain clearing houses were causing grave concern to hauliers in that part of the area.

An instance of rate-cutting quoted to me by the manager of a prominent Tees-side haulage concern was sug gested as a case of a big undertaking outside the industry pooling its resources with a subsidiary to enable them to squeeze out competitors. Bulk traffic by eight-wheeler, which my informant said was not economic below 2s. 6d. a mile, was quoted at a rate averaging 2s. a mile and the company could still show a profit because their fleet maintenance was charged on the bill for the main concern's C-licence fleet.

This man considered the future of the transport industry in the northeast to be bright, provided that unfair competition could be curbed and local hauliers acted together in their own interests.

The transport manager of one of the biggest steel makers in the country told me that if he wanted to get a reduction in costs, it would be the easiest thing in the world to give outside hauliers back-loads at cut rates at the expense of local operators. But, taking the tong view, he was not interested in rate-cutting, but

fligood service from the local man at fair rates.

This executive thought that British Road Services, with, in most cases, increasingly competitive rates, were a strong stabilizing influence. They were willing and able to accept small lots for anywhere, a service which most private concerns found impossible. British Railways, who handled a large proportion of their bulk traffic, were also satisfactory.

He said they were not prepared to grant a flat 5 per cent. increase, but were always ready to consider any case sympathetically if the operator concerned was able to show that existing rates were uneconomic. The company employed a number of hauliers and he endeavciured to give them traffic to the particular areas which they predominantly served.

The percentage of unsatisfactory drivers appears to have declined with the increased availability of staff, but the number of experienced men lost to easier work in factories remains high, particularly on Tees-side. One haulier employing a large number of drivers estimates that whereas before nationalization 95 per cent. of his staff were satisfactory, the loss of good men to other jobs has reduced the proportion to 70 per cent.

A point, emphasized by a haulier, on the question of back-loads deserves attention. The ever-increasing tendency, even among reputable hauliers, to accept return loads at uneconomic prices can have a boomerang effect in gradually reducing all rates. Under present conditions, particularly in clearing-house business, many outward loads carried by local hauliers can become backloads for the outsider. He forecasts an all-round reduction of 10 per cent. if present trends are not checked.

If such a situation developed, it would be a powerful argument for the opponents of free enterprise in favour of renationalization.