One Hears— A few odd things, after all in spite of the holidays. 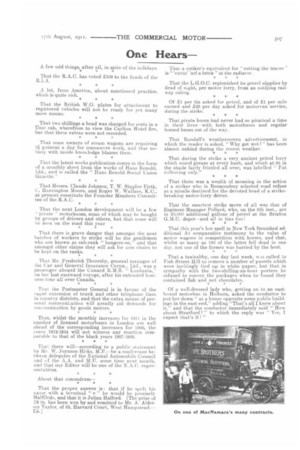 Page 13, 17th August 1911 — One Hears— A few odd things, after all in spite of the holidays.
Close
Noticed an error?
If you've noticed an error in this article please click here to report it so we can fix it.
Keywords : Steam Wagon, Hans Renold, Truck, Lorry

A lot, from America, about sanctioned practice, which is quite rich.

That the British W.O. plates for attachment to registered vehicles will not be ready for yet many more moons.

That two shillings a head was charged for seats in a Unic cab, wherefrom to view the Carlton Hotel fire, but that these extras were not recorded.

That some owners of steam wagons are requiring ai guineas a day for marneuvre work, and that nobody with inside know ledge blames them.

That the latest works publication comes in the form of a monthly sheet from the works of Hans Renold, Ltd., and is called the "Hans Renold Social Union Gazette."

That the next London development will he a few pirate " motorbuses, some of which may be bought by groups of drivers and others, but that none will be seen on the road this year That there is grave danger that amongst. the next batches of workers to strike will be the sentlemen who are known as cab-rank "hangers-on,' and that amongst other claims they will ask for arm chairs to be kept on the ranks.

That Mr. Frederick Thoresby, general manager of the Car and General Insurance Corpn., Ltd., was a passenger aboard the Cunard R.M.S. " Lnsitania," (IQ her last eastward voyage, after his extended business tour all over Canada.

That the Postmaster General is in favour of the rapid extension of trunk and other telephone lines in country districts, and that the extra means of personal communization will greatly aid demands for (Immunisation by goods motors.

That, whilst the monthly increases for 1011 in the number of licensed motorbuses in London are well ahead of the corresponding increases for 1906, the years 1912-1914 will not witness any reaction cornparable to that of the black years 1907-1909.

That there will—according to a public statement by Mr. W. Joynson-Hieks, M.P.—be a conference between delegates of the National Automobile Council and csf the A.A. and M.U. some time next month, and that our Editor will be one of the N.A.C. representatives.

About that conundrum That the proper answer is : that if he spelt his name with a terminal " e " he would be precisely HalfOrcie, and that it is Julian Halford. iThe prize of C2 2s. has been won by and remitted to Mr. A. Aldersey Taylor, of 83, Harvard Court, West Hampstead.—

That a striker's equivalent for "cutting the traces is " 'eavin"arf a brick" at the radiator.

That the L.(1.0.C. replenished its petrol supplies by dead of night, per motor lorry, from an outlying rail way siding.

Of .21 per tin asked for petrol, and of 21 per mile. earned and £25 per day asked for motorvan service, during the strike.

That pirate buses had never had so piratical a time in their lives—with both motorbuses and regular horsed buses out of the way.

That Randall's weathersereen advertisement, in which the reader is asked, "Why get wet?" has been almost unkind during the recent weather.

That during the strike a very ancient petrol lorry which oozed grease at every bush, and which at 95 in the shade fairly frizzled all over, was labelled " Fat collecting only."

That there was a wealth of meaning in the action of a striker who in Bermondsey selected road refuse as a missile destined for the devoted head of a strikebreaking motor-lorry driver.

That the smartest strike move of all was that of Engineer-Manager Pollard, who, on the 5th inst., got in 20,000 additional gallons of petrol at the Brixton G.M.C. depot—and all in tins too!

That this year's hot spell in New York furnished additional Al comparative testimony to the value of motor wagons in competition with horses, and that, whilst as many as 150 of the latter fell dead in one day, not one of the former was harried by the heat.

That a taxicabby, one day last week, was called to Fish Street Hill to remove a number of parcels which wore invitingly tied up in white paper, but that in sympathy with the two-shilling-an-hour porters he refused to convey the packages when he found they contained fish and not chocolates.

Of a well-dressed lady who, getting on to an eastbound motorbus in Holborn, asked the conductor to put her down " at a house opposite some public buildings in the east end," adding "That's all I know about it," and that the conductor immediately said " How about Stratford ? " to which the reply was " Yes, I expect that's it ! "