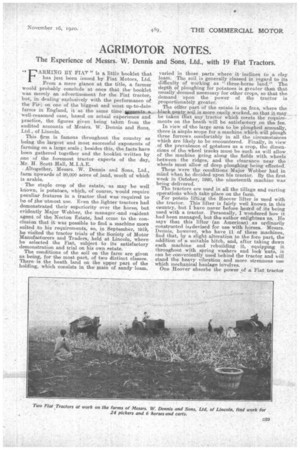 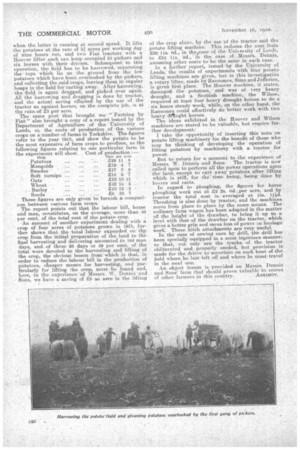 The Experience of Messrs. W. Dennis and Sons, Ltd., with 19 Fiat Tractors.

. ARMING BY FIAT " is a little booklet that has just been issued by Fiat Motors, Ltd.

From a mere glance at the title, a farmer would probably conclude at once that the booklet was merely an advertisement for the Fiat tractor, but, in dealing exclusively with the performance of the Fip-i: on one of the biggest and most up-to-date farms in England, it at the same time isasents a well-reasoned case, based on actual experience and practice, the figures given being taken from the audited accounts of Messrs. W. Dennis and Sons, Ltd. of Lincoln. . This firm is famous throughout the country as being the largest" and most successful exponents of farming on a large scale ; besides this, the facts have been gathered together and the booklet written by one of the foremost tractor experts of the day, Mr. H. Scott Hall, M.I.A.E, Altogether, Messrs. W. Dennis and Sons, Ltd., farm upwards of 20,000 acres of land, much of which" is arable.

The staple crop of the estate, as may be well known, is p-otatoles, which, of course, would require peculiar features in a tractor that was required to be of the utmost use. Even the lighter tractors had demonstrated their superiority over the horse, but evidently Major Webber, the manager rand resident agent of the Nocton Estate, had come. to the conclusion that it was possible to find a machine more suited to his requirements, so, in September, BO, he visited the tractor trials of the Society of Meter Manufacturers and Traders, held at Lincoln, where he selected the Fiat, subject to its satisfactory demonstration and trial on his own estate.

The conditions of the soil on the farm are given as being, for the most part, of two. distinct classes. There is the heath land on the upper part of the holding, which consists in the main of sandy loam, varied in those parts where it-inclines to a clay loam. The soil is generally classed in regard to its difficulty of working as 'thre-horse land." The depth of ploughing for potatoes is greater than that usually deemed necessary for other crops, so -that the demand upon the • power of the tractor is proportionatelY greater.

The other part of the estateis on fens, where the black peaty soil is more easily worked, so that it may, be taken that any, tractor which meets the requirements on the heath Will be satisfactory on the fen. In view of the large area to be ploughed 'annually, there is ample scope for a machine which will plough three furrows comfortably in all the circumstances which are likely to be encountered. Finally, in view of the prevalence of notatoes as a crop, the dimen sions of the wheel tracks must, be such as will allow of the machine going along the fields with wheels between the ridges, and the clearance near the wheels must allow of deep ploughing being effected.

Thew were the conditions Major Webber had in Mind when he decided-upon his tractor. By the first week in October, 1920, the nineteenth machine was being delivered.

The tractors are used in all the tillage and carting operations which take place on the farm. For potato liftiag the Hoover lifter is used with the tractor. This lifter is fairly well known in this country, but I 'have never before hethd of its being used with a tractor. Personally, I wondered how it had been managed, but the author enlightens us. He says that this lifter (an American) as ordinarily constructed isidevised for use with horses. Messrs. • Dennis, however, who have 11. of these machines, • find that, by a slight alteratien to the fore part, the' addition of a suitable hitch, and, after taking down each machine and rebuilding it, 'equipping it throughout -with spring washers and, lock nuts, it• can be conveniently used behind the tractor and will stand the heavy vibration and more strenuous use which mechanical haulage involves. One Hoover absorbs the power of a Fiat. tractor elien the latter is running at second speed_ It lifts the potatoes at the rate of 3 acres per working day of nine hours net and two Fiat "t•raetors with a Hoover lifter each can keep occupied 24 pickers and six horses with their drivers. Subsequent. to this operation, the field has to be harrowed, separating the tops which lie op the ground from the few potatoes which have been overlooked by the pickers, and collecting the said Craps, leaving them in regular heaps in the field for carting away. After harrowing, the field is again dragged, and. picked over again. All the harrowing and dragging is done. by tractor, and the actual saving effe_cted by the use of the tractor as against horses, on the complete job, is at the rate, of 25 per acre. The same post that brought me "'arming by Fiat" also brought a copy of a report issued by the Department of Agriculture of the University of Leeds, or, the costs of production of the various crops on a number of farms in Yorkshire. The figures refer to the year 1919, and show the potato to be the most expensive of farm crops to produce, as the following figures relating to one particular farm in the experiment will show. Cost of production :—

The report points out that the labour bill, horse and man, constitutes, on the average, more than 40 per cent.. of the total cost of the potato crop. An account of another experiment dealing with a crop of four acres of potatoes grown in 1918, further shows that the total labour expended on the crop from the initial preparation of the land to the final harvesting and delivering amounted to 164 man days, and .of these99 days or 59 per cent. of the total were devoted to the harvesting and lifting of the crop, the obvious lesson from which is that, in order to reduce the labour bill in the production of potatoe_s, cheaper means for harvesting, and partitularly for lifting the crop, must be found and, here, -in• the experience of Messrs. W. Dennis and Sons, we have a saving Of 25 an acre in the lifting of the crop alone, by the use of the tractor arid th0 potato lifting machine. This reduces the cost front. 129 lls. 8d., in theicase of the University of Leeds, to 224 us. 8d., in the case of Messrs. Dennis, assuming other costs to be the same in each ease. . In a further report, issued by the University of Leeds, the results of experiments with four Potato lifting machines are given, but in this investigation a rotary lifter, made by Ransomes, Sim S and Jefferies, is given first place. The Hoover machine, it. states, damagedthe potatoes, and was of very heavy draught, and a Scottish machine, the Wilson, required at least four heavy draught horses to do a six hours steady work, while, on the other hand, the Ransomes could effectively do better work with two heavy deanght horses. The ideas exhibited in the Hoover and.. Wilson machines are stated to be valuable, but require further development:

I take the opportunity of inserting this note an potato lifting machinery for the benefit of those who may be thinking of developing the operation of lifting potatoes by machinery with a, tractor for power.

But to return for a moment to the experience. ot Messrs. W. Dennis and Sons. The tractor is now called upon to perform all the power operations upon the farm. except to cart away potatoes after lifting which is Still, for the time being, being done by. horses and carts.

In regard to ploughing, the figures for horse ploughing work out at £2 2s. 6d. ,per acre, and by tractor the total cost is• averaged at 15s. aid. Threshing is also done by tractor, and the machines move from place to place by the same means. The ordinary farm wagon has been adapted in the matter of the height of the drawbar, to bring it up to a level with that of the drawbar on the tractor, which gives a better grip and saves loss of power on haulage work. These hitch attachments are very useful.

In the ease of sowing corn by drill, the drill has been specially equipped in a most ingenious Manner, so that, not, only are the tracks or the tractor obliterated and properly seeded, but provision is made for the driver to ascertain on each bout of the field where he last left off and where he must travel in the next one.

An object. lesson is provided •on Messrs. Dennis and-Sons' farm that should prove valuable to scores of other farmers .in this country. AGRIEFOT.