TRACTOR PRODUCTION IN THE STATES. 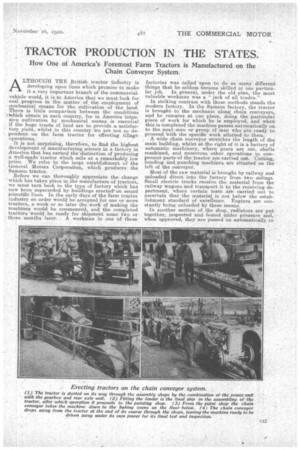 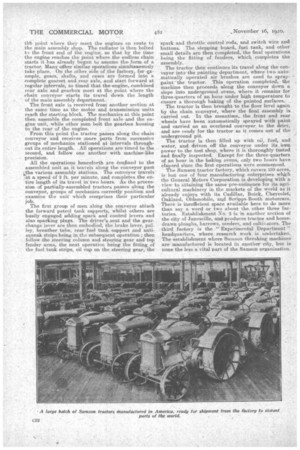 Page 15, 16th November 1920 — TRACTOR PRODUCTION IN THE STATES.
Close
Noticed an error?
If you've noticed an error in this article please click here to report it so we can fix it.

How One of America's Foremost Farm Tract-ors is Manufactured on the Chain Conveyor System.

ALTHOU.G1 THE ,British tractor industry is developing upon lines which promise to make it a very important branch of the commercialvehicle world, it is to America that we must look for real progress in the matter of the employment of mechanical means for the cultivation of the land. There is little comparison between the conditions' !:'which obtain in each country, for in America intensive cultivation by mechanical means is essential if the huge tracts of land are to provide a satisfactory yield, whilst in this country we are not so dependent -on the farm tractor for effecting tillage operations.

It is not surprising, therefore, to find the highest development of manufacturing science in a factory in America that has earned the distinction of producing a well-mad& tractor which sells at a remarkably low price. We refer to the large establishment of the General Motors Corporation, which produces the Samson tractor.

' Before we can thoroughly appreciate the change which has taken place in the manufacture of tractors, we must turn back to the type of factory which has now been superseded by buildings erected' on sound scientific lines. In the early days of the farm tractor industry an order would be accepted for one or more tractors, a week or so later the work of making the machines would be commenced., and the completed tractors would be ready for shipment some two or three months later. A workman in one of these factories was called upon to do so many different things that he seldom became skilled at one particular job. In general, under the old plan, the most valuable workman was a "jack of all trades."

In striking contrast with these methods stands the modern factory. In the Samson factory, the tractor is brought to the mechanic along chain conveyors, and he remains at one place, doing the 'particular piece of work for which he is employed, and when this is completed the machine passes automatically on to the next man or group of men who are ready to proceed with the specific work allotted to them. A wide.chain conveyor stretches the length of the . main building, whilst at the right of it is a battery of automatic machinery, where gears are cut, shafts machined, and numerous other operations to component parts-of the tractor are carried out. Cutting, 'bending and punching machines are situated on the left of the conveyor.

Most of the raw material is brought by railway. and unloaded direct into the factory from two sidings. Small electric trucks receive the material from the railway wagons and transport it to the receiving department, where 'certain tests are Carried out to ascertain that the material is not below theestablishment standard of excellence. Engines are constantly being unloaded by these means.

In another section of the shop, radiators are put together, inspected and tested niftier pressure and, ' when 'approved, they are passed on automatically to the point where they meet the engines en route to the main assembly shop. The radiator is then bolted ta the front end of the engine, so that by the time the engine reaches the point where the endless chain starts it has already begun to assume the form of a tractor. Many other similar operations simultaneously take place. On the other aside of the factory, for example, gears, shafts, and cases are formed into a complete gearset and rear axle, and startforward at regular intervals, so timed that the engine, combined rear axle and gearbox meet at the point where the chain conveyor starts its travel down the length ' of the main assembly, department.

The front axle is received from another section at the same time as the motor and transmission units reach the starting block. The mechanics at. this point then assemble the completed front axle-and the engine unit, while other men bolt the gearbox housing to the rear of the engine.

From this point the tractor passes along the chain conveyor and receives more parts from successive groups of mechanics stationed at intervals throughout its entire length. All operations are timed to the second, and follow one another with machine-like precision.

h various assembly stations. The conveyor travels. e‘t at a speed of 2 ft. per minute, and completes the en

tire length of its travel in two hours. As the procession of partially-assembled tractors passes along the conveyor, groups of mechanics correctly position and examine the unit which comprises their particular job.

The first group of men along the conveyor attach the forward petrol tank supports, whilst others are busily engaged adding spark and control levers and also sparking plugs. The driver's seat and the gearchange lever are then embodied, the brake Lever, pulley, breather tube, rear fuel tank support and antisqueak strips being in the subsequent operation ' • then follow the steering column and steering gear and top fender arms, the next operation being the fitting of the fuel tank strips, oil cup on the steering gear, the spark and throttle control rods, and switch wire and buttons: The stepping .board, fuel tank, and other small details are then completed, the final operations. being the fitting of fenders, Which completes the assembly. The tractor then continues its travel along the conveyor into the painting department, where two automatically operated air brushes are used to spray paint the tractor. This operation completed, the . machine then proceeds along the conveyor down a slope into underground ovens, where it remains for three-quarters of an hour under high temperature to ensure a thorough baking of the painted surfaces.

The tractor is then brought to the floor level again by the chain conveyor, where the final assembly is • carried out. In the meantime, the front and rear wheels have been automatically sprayed with paint and carried on an overhead conveyor to the drier, and are ready for the tractor as it comes out of the underground pit. The tractor is then filled up with oil, fuel, and water, and driven off the conveyor under its Own power to the test shop, where it is thoroughly tested and finally inspected. Except for the three-quarters of an hour in the baking ovens, only two hours have elapsed since the first operations were commenced. The Samson tractor factory, which covers 150 acres, is but one of four manufacturing enterprises whieh the General Motors Corporation is developing with a view to attaining the same pre-eminence for its agricultural machinery in the markets of the world as it already enjoys with its Cadillac, Buick, Chevrolet, Oakland, Oldsmobile, and Scripps-Booth Motorcars. There is insufficient space available here to do more than say a. word or two about the, other three fac tories. Establishment No. 2 is in another section of the city of Janesville, and produces tractor and horse drawn ploughs, harrows, seeders, and eulthators. The third factory is the " Experimental Department " headquarters, where research work is undertaken.

The establishment where Samson threshing machines are manufactured is located in another city, but is none the less a-vital part of the Samson organization.