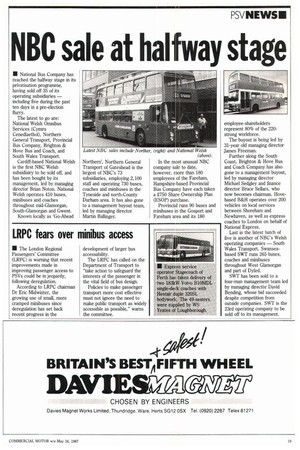 • National Bus Company has reached the halfway stage in its privatisation programme, having sold off 35 of its operating subsidiaries — including five during the past ten days in a pre-election flurry.

Cardiff-based National Welsh is the first NBC Welsh subsidiairy to be sold off, and has been bought by its management, led by managing director Brian Noton. National Welsh operates 410 buses, minibuses and coaches throughout mid-Glamorgan, South-Glamorgan and Gwent.

Known locally as 'Go-Ahead Northern', Northern General Transport of Gateshead is the largest of NBC's 73 subsidiaries, employing 2,100 staff and operating 730 buses, coaches and minibuses in the Tyneside and north-County Durham area. It has also gone to a management buyout team, led by managing director Martin Ballinger. In the most unusual NBC company sale to date, however, more than 180 employees of the Fareham, Hampshire-based Provincial Bus Company have each taken a 2750 Share Ownership Plan (ESOP) purchase.

Provincial runs 90 buses and minibuses in the Gosport and Fareham area and its 180 employee-shareholders represent SO% of the 220strong workforce.

The buyout is being led by 31-year old managing director James Freeman.

Further along the South Coast, Brighton & Hove Bus and Coach Company has also gone to a management buyout, led by managing director Michael Sedgley and finance director Bruce Sellars, who now becomes chairman. Hovebased B&H operates over 200 vehicles on local services between Shoreham and Newhaven, as well as express coaches to London on behalf of National Express.

Last in the latest batch of five is another of NBC's Welsh operating companies — South Wales Transport. Swanseabased SWT runs 265 buses, coaches and minibuses throughout West Glamorgan and part of Dyfed.

SWT has been sold to a four-man management team led by managing director David Bending, whose bid succeeded despite competition from outside companies. SWT is the 23rd operating company to be sold off to its management.