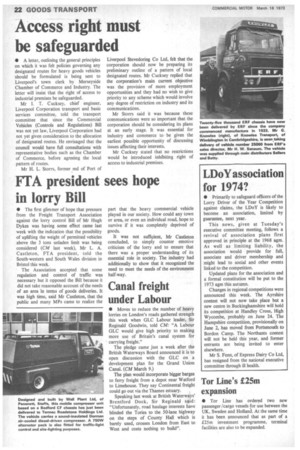 • The first glimmer of hope that pressure from the Freight Transport Association against the lorry control Bill of Mr Hugh Dykes was having some effect came last week with the indication that the possibility of uplifting the weight of permitted vehicles • above the 3 tons unladen limit was being considered (CM last week), Mr L. A. Castleton, FTA president, told the South-western and South Wales division in Bristol this week.

The Association accepted that some regulation and control of traffic was necessary but it opposed the gill because it did not take reasonable account of the needs of an area in terms of goods deliveries. It was high time, said Mr Castleton, that the public and many MPs came to realize the part that the heavy commercial vehicle played in our society. How could any town or area, or even an individual road, hope to survive if it was completely deprived of goods.

It was not suffieient, Mr Castleton concluded, to simply counter emotive criticism of the lorry and to ensure that there was a proper understanding of its essential role in society. The industry had additionally to show that it recognized the need to meet the needs of the environment half-way.