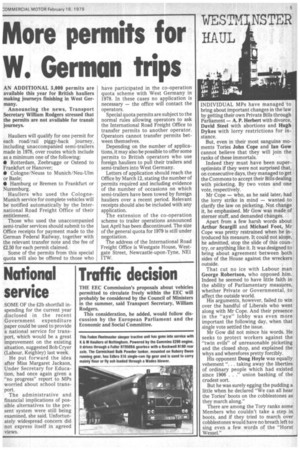 INDIVIDUAL MPs have managed to bring about important changes in the law by getting their own Private Bills through Parliament — A. P. Herbert with divorce, David Steel with abortions and Hugh Dykes with lorry restrictions for instance.

But, even in their most sanguine moments Tories John Cope and Ian Gow cannot believe that they will join the ranks of these immortals.

Indeed they must have been superoptimists if they were not surprised that, on consecutive days, they managed to get the Commons to accept their Bills dealing with picketing. By two votes and one vote, respectively.

Mr Cope — who, as he said later, had the lorry strike in mind — wanted to clarify the law on picketing. Not change it, he emphasised. Mr Gow was made of sterner stuff, and demanded changes.

Apart from a few harsh words about Arthur Scargill and Michael Foot, Mr Cope was pretty restrained when he introduced his measure. It could not alone, he admitted, stop the slide of this country, or anything like it. It was designed to bring about agreement 'between both sides of the House against the wreckers outside.

That cut no ice with Labour man George Robertson, who opposed him. Indeed he seemed to have little faith in the ability of Parliamentary measures, whether Private or Governmental, to affect the outside world.

His arguments, however, failed to win over the handful of Liberals who went along with Mr Cope. And their presence in the "aye" lobby was even more important the following day, when that single vote settled the issue.

Mr Gow did not mince his words. He seeks to protect workers against the "twin evils" of unreasonable picketing and the closed shop, and explained the whys and wherefores pretty forcibly.

His opponent Doug Hoyle was equally vehement ". . . taking away the liberties of ordinary people which had existed since 1906 . ." union bashing of the crudest sort.

But he was surely egging the pudding a little when he declared "We can all hear the Tories' boots on the cobblestones as they march along."

There are among the Tory ranks some Members who couldn't take a step in boots, and if they tried to march over cobblestones would have no breath left to sing even a few words of the "Horst Wessel."