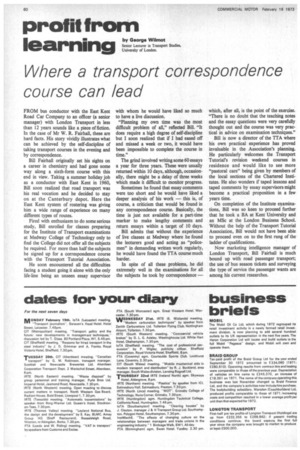 Where a transport correspondence course can lead

FROM bus conductor with the East Kent Road Car Company to an officer (a senior manager) with London Transport in less than 12 years sounds like a piece of fiction. In the case of Mr W. R. Fairhall, these are hard facts. His story vividly illustrates what can be achieved by the self-discipline of taking transport courses in the evening and by correspondence.

Bill Fairhall originally set his sights on a career in chemistry and had gone some way along a sixth-form course with this end in view. Taking a summer holiday job as a conductor with East Kent in 1960, Bill soon realized that road transport was his real vocation and he decided to stay on at the Canterbury depot. Here the East Kent system of rostering was giving him a wide range of experience on many different types of routes.

Fired with enthusiasm to do some serious study, Bill enrolled for classes preparing for the Institute of Transport examinations at Medway College of Technology only to find the College did not offer all the subjects he required. For more than half the subjects he signed up for a correspondence course with the Transport Tutorial Association.

He soon encountered all the difficulties facing a student going it alone with the only life-line being an unseen essay supervisor with whom he would have liked so much to have a live discussion.

"Planning my own time was the most difficult problem of all," reflected Bill. "It does require a high degree of self-discipline but I soon realized that if I had eased off and missed a week or two, it would have been impossible to complete the course in time."

The grind involved writing some 60 essays a year for three years. These were usually returned within 10 days, although, occasionally, there might be a delay of three weeks which made it difficult to monitor progress.

Sometimes he found that essay comments were too short and he would have liked a deeper analysis of his work — this is, of course, a criticism that would be found in any correspondence course. Basically, the time is just not available for a part-time marker to make lengthy comments and return essays within a target of 10 days.

Bill admits that without the experience of live classes at Medway where he found the lecturers good and acting as "policemen" in demanding written work regularly, he would have found the TTA course much harder.

In spite of all these problems, he did extremely well in the examinations for all the subjects he took by correspondence — which, after all, is the point of the exercise. "There is no doubt that the teaching notes and the essay questions were very carefully thought out and the course was very practical in advice on examination techniques."

Bill is now a director of the TTA where his own practical experience has proved invaluable in the Association's planning. He particularly welcomes the Transport Tutorial's revision weekend courses in residence and would like to see more "pastoral care" being given by members of the local sections of the Chartered Institutes. He also wonders if taped lessons and taped comments by essay supervisors might become a practical proposition in a few years time.

On completion of the Institute examinations, Bill was so keen to proceed further that he took a BA at Kent University and an MSc at the London Business School. Without the help of the Transport Tutorial Association, Bill would not have been able to proceed even on to the first rung of the Ladder of qualifications.

Now marketing intelligence manager of London Transport, Bill Fairhall is much bound up with road passenger transport; the use of bus season tickets and surveying the type of service the passenger wants are among his current researches.