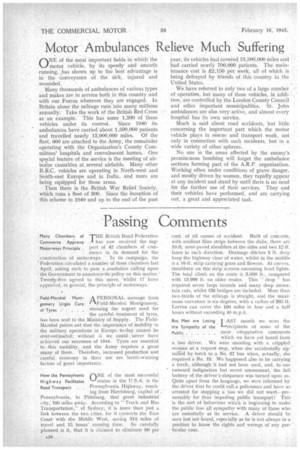 Page 22, 16th February 1945 — Motor Ambulances Relieve Much Suffering
Close
Noticed an error?
If you've noticed an error in this article please click here to report it so we can fix it.

ONE of the most important fields in which the motor vehicle, by its speedy and smooth running, has shown up to the best advantage is in the coriveyance of the sick, injured and wounded. , • • , Many thousands of ambulances of various types and makes are in service both in this country and with our Forces wherever they are engaged. In Britain alone the mileage runs into many milliOns -annually. Take the work of the British Red Cross as an example. This has some 1,200 of these vehicles under its control. Since 1940 its ambulandes have carried about 1,500,000 patients and travelled nearly 13,000,000 miles. Of the fleet, 600 are attached to the Army, the remainder operating with the Organization's County Committees' hospitals and convalescent homes. One special feature of the service is the meeting of airborne casualties at several airfields. Many other B.R.C. vehicles are operating in North-west and South-east Europe and in India, and more are being equipped for those areas.

Then there is the British War Relief Society, which runs a fleet of 300. Since the inception of this scheme in 1940 and up to the end of the past. year, its vehicles had covered 13,500,000 Miles and had carried nearly 700,000 patients. The maintenance cost is £2,150 per week, all of which is being defrayed by friends of this country in the United States.

We have referred to only two of a large number of operatOrs, but many of these vehicles, in addi•• tion, are controlled by the London County Council and other important municipalities. St. John ambulances are also very active, and almost every hospital has its own service. • Much is said about road accidents, but little concerning the important part which the motor vehicle plays in rescue and transport work, not only in connection with such incidents, but in a wide variety of other spheres.

No one in the areas affected by the enemy's promiscuous bombing will forget the ambulance sections forming part of the A.R.P. organization. Working often under conditions of grave danger, and mostly driven by women, they rapidly appear at any incident and stand by until there is no need for the further use of their services. They and their vehicles have performed, and are carrying out, a great and appreciated task.