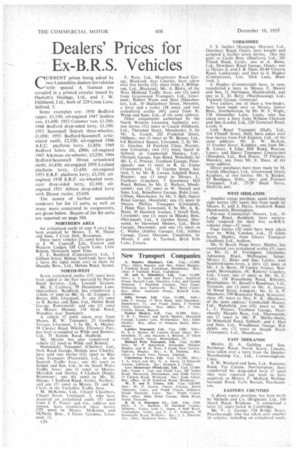 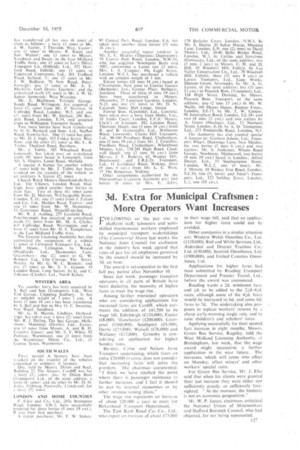 revealed in a printed circular issued by Hackett's Haulage, Ltd., and J. W. Fiekisend, Ltd., both of 229 Cross Lane, Salford, 5.

The names of further successful tenderers for list 13 units, as well as many more concerned in assignments, are given below. Buyers of list R6 units arc reported on page 584.

Mr. Mealor has also transferred a vehicle (21 tons) to Wilde and Bennett.

Two trailers, one of them a low-loader, have been made' over io Messrs. Sunter Bros., Northallerton, by Mr. W. F. Wight, 134 Alwoodley Lane, Leeds, who has , taken over a lorry from William Clarkson and Son (Leeds), Ltd., 120 Gomersal Road, Leeds. 4.

Direct purchases have been made by M.

S. W. Wreford and Sons, Ltd., Ransome Road, Far Cotton, Northampton. have transferred the drop-sided lorry (3 tons) they were reported last week to have acquired, to Messrs. F. Mallard, Wellingborough Road, Earls Barton, Northampton, EASTERN COUNTIES A direct repeat purchase has been made by Nicholls and Co. (Brighton), Ltd., 100 -North Road, Brighton. It comprised a lorry (21 tons) based in Cambridge.

Mr. V. J. Grange. 124 Bridge Street, Peterborough, who has taken over another 10 vehicles, including an articulated outfit,

A special A licence for another vehicle (2 tons) held by Mr. J. Libby has been revoked on the transfer of the vehicle to an ordinary A licence (2l,tons).

The Eastern Licensing Authority has also authorized the assignment of a vehicle (2 tons) to Litlingtoo Transport Co., Ltd.,

Three special A licences have been revoked on the transfer of the vehicles concerned to ordinary A licences. One, held by Messrs. Dixon and Boo!, Building 22, The Airport, Ca-rdif., was for a lorry (3.t tons); one. by Dixon -13ool (Transport). Ltd.. of the same address, a lorry tons): and the other by Mr. D. O. Jones, Fithinog, Pontwelly, llandyssnl, for n lorry (27 tons),

-Eleven lorries (28 tons 14 cwt..) based at Chcssingron, have gone to Central -Garage (Bathgatel, Ltd., George Place, Batbgatc, Scotland. Three of these (8 tons -19 cwt.) have been transferred to Messrs.