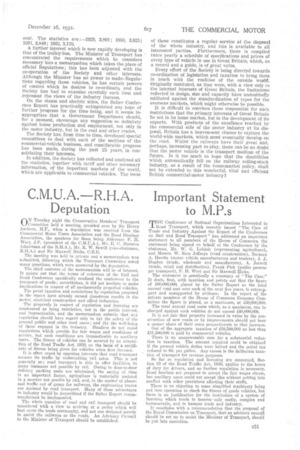 Page 77, 16th December 1932 — Important Statement to M.P.s
Close
Noticed an error?
If you've noticed an error in this article please click here to report it so we can fix it.
Keywords : Motoring Taxation In The United Kingdom, Salter Report, United Kingdom, Transport, Tax, Business / Finance

mHE Conference of National Organizations Interested in Road Transport, which recently issued " The Case of Trade and Industry Against the Report of the Conference on Rail and Road Transport" has addressed an important statement to all members of the House of Commons, the statement being signed on behalf of the Conference by the -chairman, Mr. W. G. Lobjoit (representing agriculture), and Messrs. W. Rees Jeffreys (road construction), Norman A. Hardie (motor vehicle manufacturers and traders), J. J. Hughes (trade, wholesale and manufacture), A. Jerrett (trade, retail and distributive), Frank Pick (public passenger transport), F. H. Wort and Sir Maxwell Hicks.

The statement is practically a summary of "The Case." It deals, first, with taxation and points out that the figure of £60,000,000, placed by the Salter Report as the total anneal road cost over each of the next five years, is extravvgent and unsupported by evidence. In the report of the private members of the House of Commons Eeonortly Committee the figure is placed, as a maxianino, at £50,000,000.

The total annual road costs which, as a maximum, can be charged against such vehicles do not exceed 140,000,000.

It is not fair that property increased in value by the construction of new roads or by improvements should not bear a proper share of their costs proportionate to that increase.

There is an unanswerable case for a substantial reduction in taxation. The amount required could be obtained if the present vehicle duties were halved and the petrol tax reduced to 6d. per gallon. Any excess is the deliberate taxation of transport for revenue purposes.

So far as regulation and licensing are concerned, Section 19 of the Road Traffic Act, 1930, applies to the hours of duty for drivers, and no further regulation is necessary. Road hauliers are prepared to accept the fair wages clause, but ancillary users could not accept this without getting into conflict with other provisions affecting their staffs.

There is no objection to some simplified Machinery being put into operation to check the fitness of goods vehicles, but there is no justification for the institution of a system of licensing which tends to become-only costly, complex and bureaucratic, and to hamper trade and industry.

It concludes with a recommendation that the proposal of the Royal Commission on Transport, that an advisory council should be set up to assist the Minister of Transport, should be put into execution.