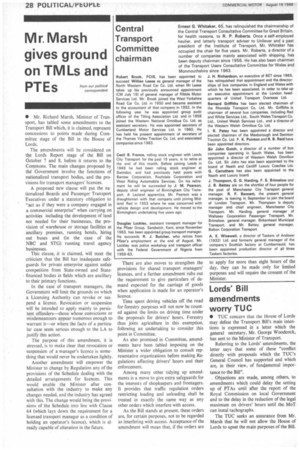 Page 30, 16th August 1968 — Central Transport Committee chairman
Close
Noticed an error?
If you've noticed an error in this article please click here to report it so we can fix it.
Keywords :

Robert Brook, FCIS, has been appointed to succeed Willian Leese as general manager of the North Western Road Car Co. Ltd. when Mr Leese takes up his previously announced appointment (CM July 19) of general manager of Ribble Motor Services Ltd. Mr. Brook joined the West Yorkshire Road Car Co. Ltd. in 1950 and became assistant to the accountant of that company in 1952. In the following year he was appointed group audit officer of the Tilling Association Ltd. and in 1958 joined the Western National Omnibus Co. Ltd. as assistant secretary. He was appointed secretary of Cumberland Motor Services Ltd. in 1960. He has held his present appointment of secretary of the Thames Valley Traction Co. Ltd. and associated companies since 1963.

Cecil B. France, rolling stock engineer with Leeds City Transport for the past 16 years, is to retire at the end of this month. Before joining Leeds in 1949 he had been rolling stock engineer at Swindon. and had previously held posts with Barrow Corporation. Rochdale Corporation and West Riding Automobile Services. On his retirement he will be succeeded by J. M. Pearson, deputy chief engineer of Birmingham City Transport. A Leyland apprentice. Mr. Pearson was a draughtsman with that company until joining Midland Red in 1953 where he was concerned with vehicle design and development. He moved to the Birmingham undertaking five years ago.

Douglas Lockley, assistant transport manager for the Pfizer Group. Sandwich. Kent. since November 1963, has been appointed group transport manager. He succeeds R. J. Butcher, who retires from Pfizer s employment at the end of August. Mr. Lockley was police workshop and transport officer with the Federal Government of Nigeria from 1959-63. Ernest G. Whitaker, 65, has relinquished the chairmanship of the Central Transport Consultative Committee for Great Britain, for health reasons, to R. P. Roberts. Once a self-employed haulier, and latterly transport adviser to Unilever and a past president of the Institute of Transport, Mr. Whitaker has occupied the chair for five years. Mr. Roberts, a director of a number of companies mainly associated with shipping, has been deputy chairman since 1956. He has also been chairman of the Transport Users Consultative Committee for Wales and Monmouthshire since 1963.

J. H. Richardson, an executive of BET since 1965, has relinquished that appointment and the directorships of bus companies in England and Wales with which he has been associated, in order to take up an executive appointment at the London headquarters of United Transport Overseas Ltd. Bernard Griffiths has been elected chairman of the Rhondda Transport Co. Ltd. Mr. Griffiths is chairman of several bus companies, including Red and White Services Ltd., South Wales Transport Co. Ltd.. United Welsh Services Ltd., and a director of the Western Welsh Omnibus Co. Ltd.

I. R. Patsy has been appointed a director and elected chairman of the Mexborough and Swinton Traction Co. Ltd. F. K. Pointon and R. B. Reid have been appointed directors.

A. E. Wisewell, a director of Taskers of Andover (1932) Ltd. and formerly general manager of the company's Scottish factory at Cumbernauld. has been appointed production director of all three Taskers factories.