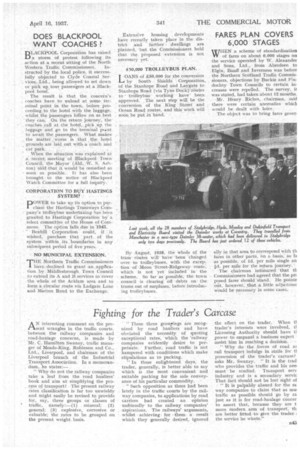 Page 57, 16th April 1937 — DOES BLACKPOOL WANT COACHES?
Close
Noticed an error?
If you've noticed an error in this article please click here to report it so we can fix it.
Keywords : Sustainable Transport, Trolleybus, Bus, Blackpool, Hastings, Tram, Hospitality / Recreation

BLACKPOOL Corporation has raised. a storm of protest following its action at a recent sitting of the North Western Traffic Commissioners. In. structed by the local police, it successfully objected to Clyde Coastal Services, .Ltd., being allowed to set down . or pick up tour passengers at a Black

grounds are laid out with a coach and _ _ . . car park. , • When the situation was explained a,t a recent. meeting of Blackpool . Town Council, the Mayor (AM, W. S. Ashton)• said that it would be remedied so • soon as possible.. It has also been brought to the notice of Blackpool Watch Committee for a full inquiry.

POWER to take up its option to purchase the Hastings Tramways Com. pany-'s trolleybus undertaking has been granted to Hastings Corporation by a select committee of the House of -Commons. The option falls_ chie in 1945. Bexhill • Corporation could, if. .. it wished, purchase that part. of the system within . its ..boundaries in any subsequent period of five years.

THE Northern Traffic Commissioners have tleclined to -grant an appfica. tion by Middlesbrough Town Council

• to extend its A and B services to•cover the whole of. the Acklara area and to . form a circular route via Ladgate Lane

and Marton Road to the Exchange.

Extensive housing developments have recently taken place in the district and further dwellings are planned, but the Commissioners hold that the proposed extension is not necessary yet £50,000 TROLLEYBUS PLAN.

OANS of 250,000 for the conversion 1-.4 by South Shields Corporation.. of the Stanhope Road and Laygate to Stanhope Road (via Tyne Dock) routes to trolleybus working have been approved. The next step will be the conversion of the King Street and Ocean Road routes, and this_work will soon be put' in hand.

By August, 1938, the whole of the • tram-thutes willhaVe-been "-changed • over to trolleybuses, with. the excep7 • tion of -Mobil. -Street-Ridgeway route, which is not yet • included' in the scheme. So far as possible, the town council is Clearing Oil debts on the

• trains out of surpluses; before introduc ing trolleybuses. •