"NEIGHBOURING" FARMER OVER 20 MILES AWAY. 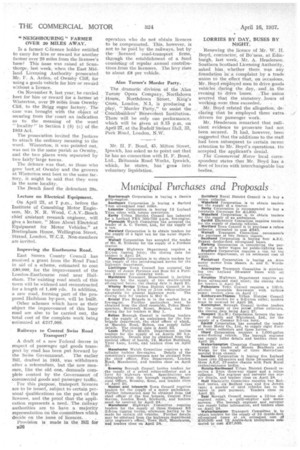 Page 40, 16th April 1937 — "NEIGHBOURING" FARMER OVER 20 MILES AWAY.
Close
Noticed an error?
If you've noticed an error in this article please click here to report it so we can fix it.
Keywords : Hailsham, Wealden, Eastbourne, Truck, Boyd, Ipswich

Is a farmer C-licence holder entitled to carry for hire or reward for another farmer over 20 miles from the licensee's base? This issue was raised at Scunthorpe, last 'week, when the East Midland Licensing Authority prosecuted Mr. F. A. Arden, of Owmby Cliff, for using a goods vehicle for hire or reward without a licence.

On November 9, last year, he carried beet for hire or reward for a farmer at Winterton, over 20 miles from Owmby Cliff, to the Brigg sugar factory. The case was brought with the object 'of securing from the court an indication as to the meaning of the word " locality " in Section 1 (5) (c) of the 1933 Act. • '

The prosecution invited the Justices to attach the ordinarymeaning to the word. Winterton, it was pointed out, was not in the same parish as Owmby, and the two places were separated by two fairly-Iarge towns.

The defence was that, as those who grew beet at Owmby and the growers at Winterton sent beet to the same factory, it might be said that they were in the same locality. .

The ,Bench .fined the 'defendant 20s.

East Sussex County Council has received a grant from the Road Fund in aid of a scheme, estimated to cost £80,000, for the improvement of the London-Eastbourne road near Hailsham. Theexisting road south of this town will be widened and reconstructed for a length of 1,400 yds. In addition, a new road, forming part of the proposed Hailsham by-pass, will be built.

Other schemes which. have as their object the improvement of this busy road are also to be carried out, the total cost of the complete work being 'estimated at £217,000, Railways to Control Swiss Road Transport?

A draft of a new Federal decree in • respect of passenger arid goods transport by road has been put forward by the Swiss Government. The earlier Bill, drafted in 1935, was withdrawn after a referendum, but the new measure, like the old one,demands complete control by the Government of commercial goods and passenger traffic. • For this purpose, transport licences are to be issued, subject to certain persOnal civalifications on the part of the licensee, and the proof that-the application represents a need. The_ railway authorities are to have, a majority representation on the committees which decide on the issue, of licences. ,

Provision is made in the Bill for 11243 operators who do not obtain licences to be compensated. This, however, is not to be paid by the railways, but by the licensed road-transport firms, through the establishment of a fund consistingof regular .annual contributions.from the licensees. The levy rises to about £8 per vehicle.

The dramatic division of the Alan Turner Opera Company, Northdown House, Northdown • Street, King's Cross, London, N.1, is producing a play, "Murder Party," to assist the Coachbuilders' Benevolent Institution. There will be only one performance, which will be given at 8.15 p.m, on April 27, at the Rudolf Steiner Hall, 33, Park Road, London, N.W.

Mr. H. F. Bond, 45, Milton Street, Ipswich, has asked us to point out that he has no connection with H. F. Bond, Ltd., Britannia Road Works, Ipswich, which, he states, has gone into voluntary liquidation. LORRIES BY DAY, BUSES BY NIGHT.

Renewing the licence of Mr. W. H. Boyd, contractor, of Bo'ness, at Edinburgh, last week, Mr. A. Henderson, Southern Scotland Licensing Authority, asked him whether there was any foundation in a complaint by a trade union to the effect that, on occasions, Mr.. Boyd employed men to drive goods vehicles "during the day. and in the

evening to drive buses. The union averred that the statutory., hours of working,were thus exceeded.. , Mr. Boyd refuted the allegation, declaring that he employed three extra drivers for passenger work.

Mr. Henderson remarked that sufficient evidence to prosecute had not been secured. It had, however, been suggested that the additions to the staff had been subsequent to certain recent attention to Mr. Boyd's operations. He accepted the applicant's denial.

The Commercial' Motor local correspondent states that Mr. Boyd has. a fleet of lorries with interchangeable bus bodies.