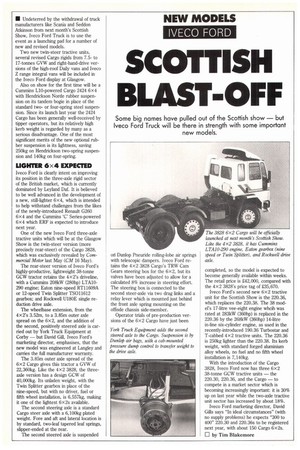 Some big names have pulled out of the Scottish show — but Iveco Ford Truck will be there in strength with some important new models.

• Undeterred by the withdrawal of truck manufacturers like Scania and Seddon Atkinson from next month's Scottish Show, Iveco Ford Truck is to use the event as a launching pad for a number of new and revised models.

Also on show for the first time will be a Cummins L10-powered Cargo 2424 6x4 with Hendrickson Norde rubber suspension on its tandem bogie in place of the standard twoor four-spring steel suspension. Since its launch last year the 2424 Cargo has been generally well-received by tipper operators, but its relatively high kerb weight is regarded by many as a serious disadvantage. One of the most significant merits of the new optional rubber suspension is its tightness, saving 250kg on Hendrickson two-spring suspension and 140kg on four-spring.

Iveco Ford is clearly intent on improving its position in the three-axle rigid sector of the British market, which is currently dominated by Leyland Daf. It is believed to be well advanced in the development of a new, still-lighter 6x4, which is intended to help withstand challenges from the likes of the newly-introduced Renault G260 6x4 and the Cummins Series-powered 6x4 which ERF is expected to introduce next year.

One of the new Iveco Ford three-axle tractive units which will be at the Glasgow Show is the twin-steer version (more precisely rear-steer) of the Cargo 3828, which was exclusively revealed by Commercial Motor last May (CM 16 May).

The wheelbase extension, from the 4x 2's 3.52m, to a 3.85m outer axle spread on the 6x2, and the addition of the second, positively steered axle is carried out by York Truck Equipment at Corby — but David Gill, Iveco Ford's marketing director, emphasises, that the new model was engineered at Langley and carries the full manufacturer warranty.

The 3.85m outer axle spread of the 6x2 Cargo gives this tractor a GVW of 22,360kg. Like the 4x2 3828, the threeaxle version has a design GCW of 40,000kg. Its unladen weight, with the Twin Splitter gearbox in place of the nine-speed, but with no driver, fuel or fifth wheel installation, is 6,557kg, making it one of the lightest 6x2s available.

The second steering axle is a standard Cargo steer axle with a 6,100kg plated weight. Fore and aft and lateral location is by standard, two-leaf tapered leaf springs, slipper-ended at the rear.

The second steered axle is suspended on Dunlop Pneuride rolling-lobe air springs with telescopic dampers. Iveco Ford retains the 4x2 3828 Cargo's TRW Cam Gears steering box for the 6x2, but its valves have been adjusted to allow for a calculated 8% increase in steering effort. The steering box is connected to the second steer-axle via two drag links and a relay lever which is mounted just behind the front axle spring mounting on the offisde chassis side-member.

Operator trials of pre-production versions of the 6 x 2 Cargo have just been York Truck Equipment adds the second steered axle to the Cargo. Suspension is by Dunlop air bags, with a cab-mounted pressure dump control to transfer weight to the drive axle. completed, so the model is expected to become generally available within weeks. The retail price is £42,000, compared with the 4x2 3828's price tag of 25,670.

With the introduction of the Cargo 3828, Iveco Ford now has three 6x2 38-tonne GCW tractive units — the 220.30, 220.36, and the Cargo — to compete in a market sector which is becoming increasingly important: it is 30% up on last year while the two-axle tractive unit sector has increased by about 18%.