panel, right). As you don't have to wait for air 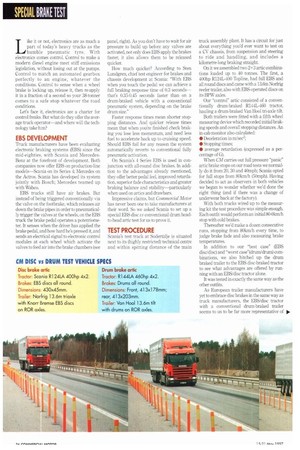 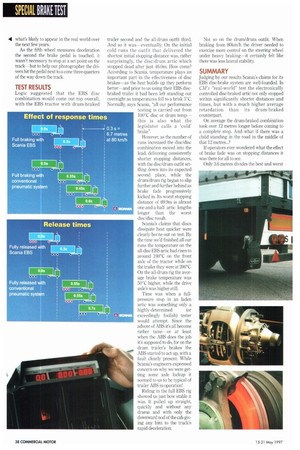 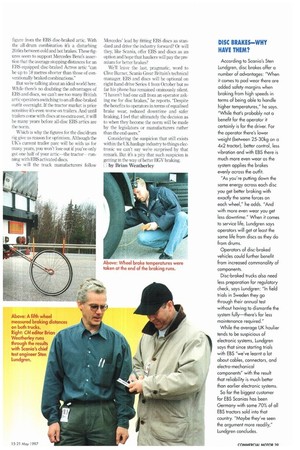 Page 38, 15th May 1997 — panel, right). As you don't have to wait for air
Close
Noticed an error?
If you've noticed an error in this article please click here to report it so we can fix it.
Keywords : Brakes, Drum Brake, Brake Fade, Brake, Disc Brake, Scania, Tractor

pressure to build up before any valves are activated, not only does EBS apply the brakes faster, it also allows them to be released quicker.

How much quicker? According to Sten Lundgren, chief test engineer for brakes and chassis development at Scania: "With EBS when you touch the pedal we can achieve a full braking response time of 0.3 seconds— that's 0.35-045 seconds faster than on a drum-braked vehicle with a conventional pneumatic system, depending on the brake drum size."

Faster response times mean shorter stopping distances. And quicker release times mean that when you're finished check braking you lose less momentum, and need less fuel to accelerate back up to cruising speed. Should EBS fail for any reason the system automatically reverts to conventional fully pneumatic activation.

On Scania's 4 Series EBS is used in conjunction with all-round disc brakes. In addition to the advantages already mentioned, they offer better pedal feel, improved retardation, superior fade characteristics and greater braking balance and stability—particularly when used on artics and drawbars.

Impressive claims, but Commercial Motor has never been one to take manufacturers at their word. So we asked Scania to set up a special EBS disc vs conventional drum headto-head artic test for us to prove it.

truck assembly plant. It has a circuit for just about everything you'd ever want to test on a CV chassis, from suspension and steering to ride and handling, and includes a kilometre-long braking straight.

On it we assembled two 2+3 artic combinations loaded up to 40 tonnes. The first, a 400hp RI24L-400 Topline, had full EBS and all round discs and came with a 13.6m Norfrig reefer trailer, also with EBS-operated discs on its BPW axles.

• Stopping times; • average retardation (expressed as a percentage of G).

When CM carries out full pressure "panic" artic brake stops on our road tests we normally do it from 20, 30 and 40mph; Scania opted for full stops from 80km/h (50mph). Having decided to act as observers in both vehicles we began to wonder whether we'd done the right thing (and if there was a change of underwear back at the factory).

With both trucks wired up to the measuring kit the test procedure was simple enough. Each outfit would perform an initial 80-0krn/h stop with cold brakes.

In addition to our "best case" (EBS disc/disc) and "worst caseldrum/drum) combinations, we also hitched up the drum braked trailer to the EBS disc-braked tractor to see what advantages are offered by running with an EBS/disc tractor alone.

It was tested in exactly the same way as the other outfits.

As European trailer manufacturers have yet to embrace disc brakes in the same way as truck manufacturers, the EBS/disc tractor with a conventional drum-braked trailer seems to us to be far more representative of

.4 what's likely to appear in the real world over the next few years.

As the fifth wheel measures deceleration the second the brake pedal is touched, it wasn't necessary to stop at a set point on the track—but to help our photographer the drivers hit the pedal next to a cone three-quarters of the way down the track.

Logic suggested that the EBS disc combination would come out top overall, with the EBS tractor with drum-braked trailer second and the all-drum outfit third. And so it was—eventually. On the initial cold runs the outfit that delivered the shortest initial stopping distance was, rather surprisingly, the disc/drum artic which stopped dead after just 46.0m. How come? According to Scania, temperature plays an important part in the effectiveness of disc brakes—as the heat builds up they perform better—and prior to us using their EBS discbraked trailer it had been left standing out overnight as temperatures fell to a brisk 5°C. Normally, says Scania, all our performance testing is carried out from 100°C disc or drum temp— this is also what the legislator calls a 'cold' brake".

However, as the number of runs increased the disc/disc combination moved into the lead, delivering consistently shorter stopping distances, with the disc/drum outfit settling down into its expected second place, while the drum/drum rig began to slip further and further behind as brake fade progressively kicked in. Its worst stopping distance of 69.9m is almost one-and-a-half artic lengths longer than the worst disc/disc result.

Scania's claims that discs dissipate heat quicker were clearly borne out on test. By the rime we'd finished all our runs the temperature on the all-disc EBS artic had risen to around 240°C on the front axle of the tractor while on the trailer they were at 200°C. On the all-drum rig the average brake temperature was 50°C higher, while the drive axle's was higher still.

Time was when a fullpressure stop in an laden artic was something only a highly-determined (or exceedingly foolish) tester would attempt. Since the advent of ABS it's all become rather tame or at least when the ABS does the job it's supposed to do, for on the drum trailer's brakes the ABS started to act up, with a fault clearly present. While Scania's engineers expressed concern on why we were getting some axle lockup it seemed to us to be typical of trailer ABS in operation!

Riding in the full EBS rig showed us just how stable it was. It pulled up straight, quickly and without any drama and with only the downward nod of the cab giving any hint to the truck's rapid deceleration. Not so on the drum/drum outfit When braking from 80km/h the driver needed to exercise more control on the steering wheel under heavy braking it certainly felt like there was less lateral stability

Judging by our results Scania's claims for its EBS disc-brake system are well-founded. In CM's "real-world" test the electronically controlled disc-braked artic not only stopped within significantly shorter distances and times, but with a much higher average retardation than its drum-braked counterpart.

On average the drum-braked combination took over 12 metres longer before coming to a complete stop. And what if there was a child standing in the road in the middle of that 12 metres..?

If operators ever wondered what the effect of brake fade was on stopping distances it was there for all to see.

Only 3.6 metres divides the best and worst figure from the EBS disc-braked artic. With the all-drum combination it's a disturbing 20.6m between cold and hot brakes. These figures seem to support Mercedes Benz's assertion that the average stopping distances for an EBS equipped disc-braked Actros artic can be up to 18 metres shorter than those of conventionally braked combinations!'

But we're talking about an ideal world here. While there's no doubting the advantages of EBS and discs, we can't see too many British artic operators switching to an all disc-braked outfit overnight. If the tractor market is price sensitive it's even worse on trailers. And until trailers come with discs at no extra cost, it will be many years before all-disc El3S artics are the norm.

Which is why the figures for the disc/drum rig give us reason for optimism. Although the UK's current trailer pare will be with us for many years, you won't lose out if you've only got one half of your artic—the tractor— running with EBS activated discs.

So will the truck manufacturers follow Mercedes' lead by fitting ERS discs as standard and diive the industry forward? Or will they, like Scania, offer EBS and discs as an option and hope that hauliers will pay the premium for better brakes?

We'll leave the last, pragmatic, word to Clive Burnet, Scania Great Britain's technical manager. EBS and discs will be optional on right-hand-drive Series 4 from October but so far his phone has remained ominously silent. "I haven't had one call from an operator asking me for disc brakes," he reports. "Despite the benefits to operators in terms of equalised brake wear, reduced downtime and safer braking, I feel that ultimately the decision as to when they become the norm will be made by the legislators or manufacturers rather than the end users."

Considering the suspicion that still exists within the UK haulage industry to things electronic we can't say we're surprised by that remark. But it's a pity that such suspicion is getting in the way of better I IGV braking.

L I by Brian Weatherley