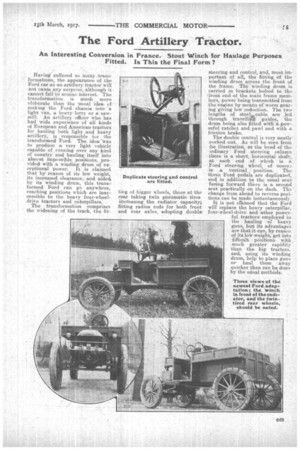 Page 13, 15th March 1917 — The Ford Artillery Tractor.
Close
Noticed an error?
If you've noticed an error in this article please click here to report it so we can fix it.

An Interesting Conversion in France. Stout Winch for Haulage Purposes Fitted. Is This the Final Form ?

Having suffered so many transformations, the appearance, of the Ford car as an artillery tractor will not cause any surprise, although it cannot fail to arouse interest. The transformation is niuch more elaborate than the usual idea, of making the Ford chassis into a light van, a heavy, lorry or a sawmill. An artillery officer who has had wide experience of all kinds of European and American tractors for hauling both light and heavy artillery, is . responsible tor the transformed Ford: The idea-was. to produce a very light vehicle capable of running over any kind of country and hauling itself into almost impossible positions, pro

• vided with a winding drum of exceptional power. It is claimed that by reason of its low weight, its increased clearance, and aided by its winding drum, this transformed Fordcan go anywhere, reaching positions which are inaccessible to the heavy four-wheeldrive tractors and caterpillars. ' The transformation -Comprises the widening of the track, tho fit ting of bigger wheels, those at the rear taking twin pneumatic tires inoteasing the radiator Capanity4 fitting radius rods for both front and rear axles, adoptinff double

steering and control, and, most important of all, the fitting of the winding drum across the front of the frame. The winding drum is carried in hraokets bolted to the -front end of the main frame 111€11/hers, power being transmitted from the engine by means of worm gearing giving low reduction. The two lengths of steel ,„cable are Jed through trav.elliW guides, the drum being also fitted with a powerful ratchet and pawl and with a friction brake.

The double control is very neatly Norked out. As will be seen from ;he illustration, at the head of the )rdinary Ford steering celumn there is a short, horizontal shaft, at each end of which is a Ford steering wheel, of pours., in a vertical position. The three. Ford pedals are duplicated, and in addition to the usual seat laaing forward there is •a second scat practically on the dash. The change from ahead to reverse positions.can be made instantaneously, It is not craimed that the Ford will replace the heavy caterpillar, four-wheel-drive and ether powerful tractors employed iii the hauling of heavy guns, but its advantages are that it can by reason of its low weiFlat, get into Dlifficult positions with much greater rapidity than the big tractors, and, using its • winding drum, help to place guns orhaul them away quicker than can be done by the uSual methods.